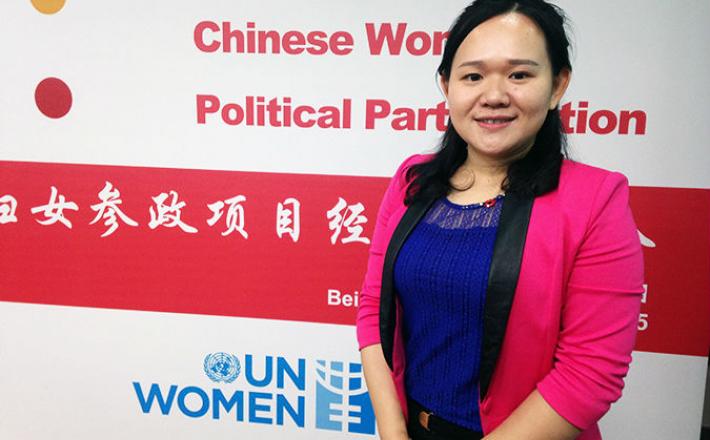 Liao Bin, from the Hunan province in China, was elected as the head of her Village Committee at 27. Her average day looks like this: hours spent in efforts to boost the economy of the village, caring for left-behind children of migrant workers, and then whatever is left of the day, she spends visiting village residents to hear about their concerns, and organizing various skills training programmes for the villagers.

“Chinese women are as capable to govern and lead as men, and must be given equal opportunities to do so,” she says.

Three years ago, Bin decided to pursue a career in local governance after participating in trainings on leadership and political participation for women under the “Enhancing Chinese Women’s Political Participation” programme, run by All-China Women’s Federation (ACWF), which is funded by UN Women’s Fund for Gender Equality (FGE).

Although it was an early champion of adopting temporary special measures and electoral quotas, China ranked 54 in 2015 in terms women’s parliamentary representation, with only 23.6 per cent parliamentarians being women.

From 2011 to 2015, the All-China Women’s Federation programme aimed at improving laws and policies, increasing women’s influence in local government, and strengthening the capacity of government, women’s groups and civil society to monitor Chinese women’s political participation and rights in the provinces of Shanxi, Heilongjiang and Hunan. It contributed towards the adoption of many progressive policies—in Hunan, the updated election guidelines stipulated 30 per cent representation of women in the village committees; in Heilongjiang the proportion was set to be more than 25 per cent; and in Shanxi, at least 15 per cent.

Through advocacy and leadership trainings, where women learned campaigning and management skills, and by working with both men and women in leadership positions, the programme led to a significant rise in the number of women active in politics and public life, exceeding the quotas. In Shanxi, women’s representation went up to 25.52 per cent in 2014 from 8.61 per cent in 2008; and in Heilongjiang, it reached 25.35 per cent in 2014, an increase of 4.05 per cent from 2011. The programme engaged more than 1,800 policy-makers, 1,000 administrative and party school teachers and students, as well as 8,000 men and women at the village level.

Chu Lijuan, 41, had some experience in running for local elections when she heard about the training workshops in 2013. “I joined the workshop to gain campaigning skills so that I could prepare a better campaign for the next election,” she says. In 2014, Lijuan’s efforts paid off, and she became the head of the Party Committee in her village in the Heilongjiang province.

The gains that the programme made continue to grow today, contributing towards changes at the national level as well. Last year, the Chinese Human Resources Authority issued a regulation stipulating the same retirement age for female and male division chief/county-level officials and senior professionals, improving women’s chances to rise to higher-level management positions.

“We are confident that the female political leaders whom the programme supported are helping to change negative perceptions of women’s capacities and inspiring other women to aspire to leadership positions,” says Julia Broussard, UN Women Country Programme Manager in China. “Chinese women have enormous leadership potential. It is important they get equal opportunities to demonstrate it.”