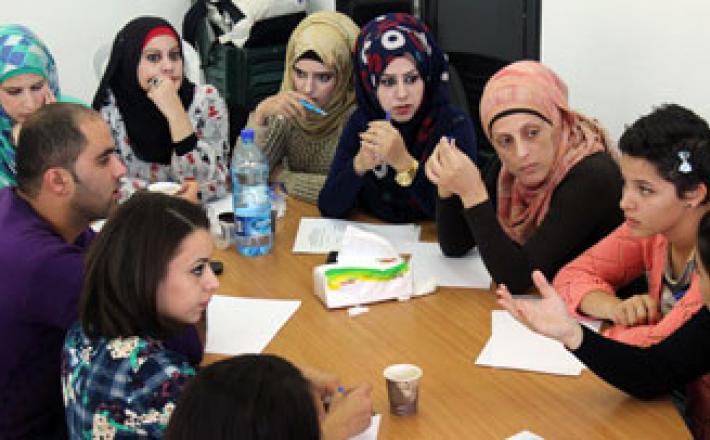 “I used to be afraid to give my opinion, but now I tell people about complex issues like politics, women’s rights and the Constitution. I feel strong,” says 24-year-old Amani Thawabta, a law school graduate from Palestine. Although she speaks about lobbying for women’s rights as powerfully as a lifelong advocate, that wasn’t always the case. Amani is from the small Palestinian village of Beit Fajjar in the central West Bank, where the conservative culture makes it hard for young women to take part in public life or claim their rights. Even travelling to nearby Bethlehem to attend university was a challenge.

Amani came out of her shell after meeting representatives of the Palestinian Centre for Peace and Democracy and the Jerusalem Centre for Women, who are implementing a programme supported by UN Women’s Fund for Gender Equality. They visited Beit Fajjar in early 2013 to recruit and train young educated Palestinians like Amani to lobby for greater gender equality in the Constitutional drafting process, which has been underway for decades in Palestine.

At first shy and reserved, Ms. Thawabta soon emerged as a committed organizer, taking part in many of the programme’s workshops and organizing others in her own community. Through 29 workshops held across Palestine, more than 700 young Palestinians like her have learned about political analysis, lobbying and advocacy, and Constitution-building.

She is also among a group of 26 young women and men representing 25 community-based organizations from rural and urban Palestine who formed a coalition called the Constitutional Shadow Committee. Drawing on the knowledge gained through such workshops, they drafted an alternative constitution that challenges the lack of gender equality in the current third draft, prepared by the official Constitutional Committee, which is comprised only of men.

To reach as many people as possible, the Shadow Committee established a Coalition of Organizations for Constitutional Equality in early 2014, spearheading an advocacy and lobbying campaign that engaged 117 political leaders from across the political spectrum in six roundtable discussions, and reached another 118 high-ranking officials (governors, ministers, members of the Palestinian Legislative Council, municipal leaders, political party leaders, lawyers and representatives of national NGOs). The coalition also used television and radio ads, newspaper articles, billboards, leaflets and social media messaging to garner support for its recommendations.

“As we are discussing our Statehood, we need politicians and the public to be aware of the important issue of non-discrimination in our Constitution,” adds Abdallah Kamil, Governor of Tulkarem. “The young women and men who have written this better version and are advocating for it are an example for society.”

Many young women who played a leading role in drafting the Shadow Constitution have been at the forefront of the campaign, placing them in leadership roles they never imagined. Layali Bedawi, 23, from Tulkarem in the West Bank, says she rarely participated in activities outside her community prior to the UN Women-supported training, because she felt unsafe doing so as a woman.

“I now feel that I have a right to speak up and say that women are equal to men and deserve the same opportunities,” says Ms. Bedawi. “I now travel to different cities and have the chance to learn from other women there and have lost my fear, because I know I have a voice to defend myself.”