Youth role in future representation and participation, discussed at International IDEA round table

Youth role in future representation and participation, discussed at International IDEA round table 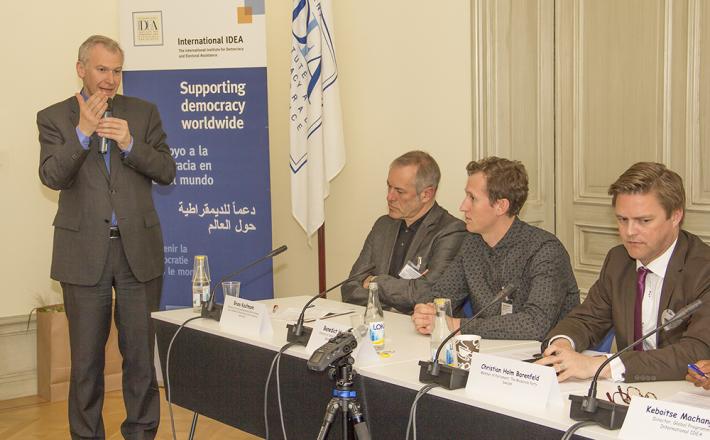 Do new generations of citizens no longer support democratic values and practices? To the relief of her audience at the seminar 'Does political participation need political parties and representation?', Pippa Norris acquitted young people on this charge. The Harvard professor noted that not only “voting support for populist-authoritarian parties and leaders in Europe is disproportionately concentrated among the older generations.” More critical views on democracy like in America –she adds in this Journal of Democracy’s web exchange– do not necessarily mean a loss of the younger generation’ faith in its values. It may be that younger people are looking for alternative ways to manifest their engagement.

The Swedish case makes the perfect example of growing political engagement among youth. In a survey with 16,000 Swedish young people aged 15-24 conducted by the Youth Barometer (Ungdomsbarometern in Swedish), 42 per cent of young Swedes say they have a strong interest in politics and society, compared to 28 per cent in 2002. Furthermore, 64 per cent of Swedes in this age group believe they have at least some opportunity to influence society, a figure that has more than doubled since 1992.

What does the politicisation of Swedish youth mean for political parties? Despite holding democratic values so dear to heart, today's youth does not tend to opt for the entire 'party concept', as Swedish parliamentarian Christian Holm put it, during the International IDEA's seminar held on April 26. In fact, the Youth Barometer tends to confirm that out of all public institutions, young Swedes between 15 and 24 trust political parties the least. Only 3 per cent of them have high confidence in political parties and 46 per cent say that political parties cannot solve Sweden's problems.

Panellists at the seminar also discussed the disparity between young people's ideas and their representation, especially when political participation occurs outside of the framework of party politics.  Benedict Hugosson, responsible for outreach and engagement of the Social Democratic Party, said that political parties can help closing the representation gap by creating relations among citizens across generations in a shared purpose. While political parties may successfully mobilise young people by penetrating the online sphere, real-life organizing with a shared purpose has a better potential of including citizens in meaningful policy-making. Through organizing, citizen's trust can be restored, Christian Holm added. From the perspective of Bruno Kaufmann, chairperson at the Initiative and Referendum Institute Europe and co-President of Global Forum on Direct Democracy, a lowered voting age might catch young peoples' interest in representative politics before they turn elsewhere.

Democratic consolidation is a never-ending process that requires evaluation and revaluation–it may be time that political parties invite young citizens to prove their commitment to democracy again.