‘And I’m a mom.’ Candidates and voters warm to kids on the trail

‘And I’m a mom.’ Candidates and voters warm to kids on the trail 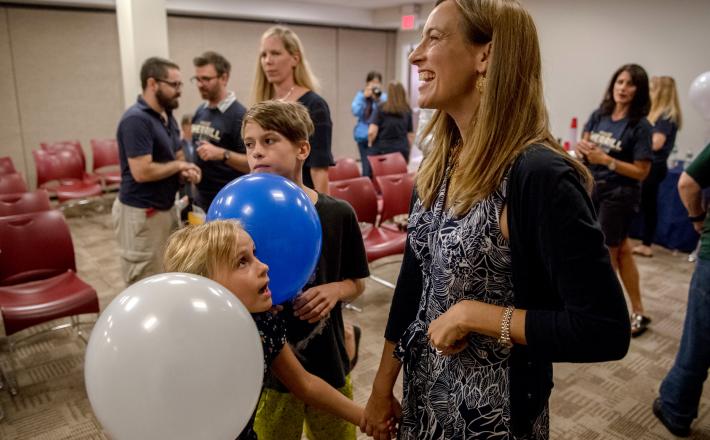 PARSIPPANY, N.J. — Mikie Sherrill, Democratic candidate for Congress, had finished a radio interview and was heading toward the stage at the local library where a crowd waited for her to begin an event with the mayor and a native-son-turned-astronaut.

But first, there was a smudge of chocolate to be dealt with.

Ms. Sherrill reached down and cleaned the face of her 6-year-old daughter, Marit, who squirmed, pigtails shaking. “I’m doing it,” Ms. Sherrill insisted. Her 8-year-old seized on the distraction to ask if he could have a cookie. “One,” his mother told him.

She briefly chided her 12-year-old for letting Marit get chocolate on her face, then took her seat on stage, settling in with a broad smile and the perfect posture honed by her days at the United States Naval Academy — apparently immune to the funny faces Marit was making from the front row.

Ms. Sherrill is often introduced as “Navy pilot, federal prosecutor and mother of four,” as if the descriptions should be hyphenated. But as she campaigns around this suburban battleground House district her role as a mother is the one most on display. Her children march in the front row of parades, tumble out of the family’s SUV with lacrosse sticks in a television ad, and milled in the crowd at Ms. Sherrill’s event with Joe Biden along with the children of her volunteers, many of whom are mothers from her children’s schools.

Click here to read the full article published by The New York Times on 12 September 2018.