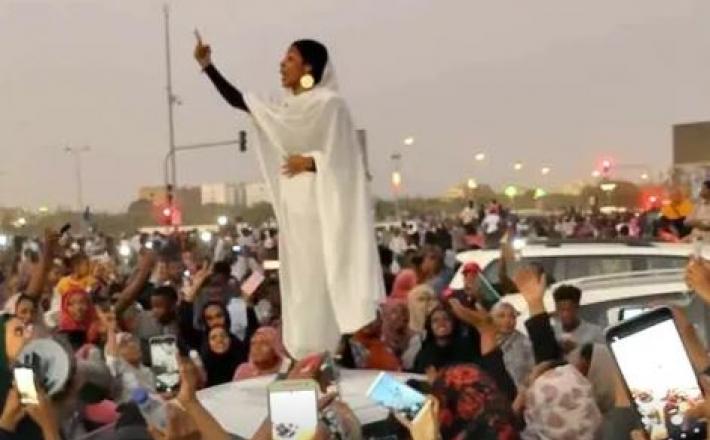 The image is striking: a young woman, alone, standing above the crowd, urging them on with songs of revolution.

Taken on Monday night in the centre of Khartoum, as tens of thousands thronged the roads in front of the heavily-guarded complex housing the headquarters of the military and the feared intelligence services, the picture of the woman in white with gold circular earrings has become an icon of a protest.

Lana Haroun told CNN she had taken the picture.

“She was trying to give everyone hope and positive energy and she did it,” she said. “She was representing all Sudanese women and girls and she inspired every woman and girl at the sit-in. She was telling the story of Sudanese women ... she was perfect.”

She added: “We have a voice. We can say what we want. We need a better life and to stay in a better place.” She said when she saw the photo on her phone, “I immediately thought: this is my revolution and we are the future.”

That the woman in white has become such a symbol in a country that has long known systematic repression of women by the state has surprised some observers.

But women have played a central role in the demonstrations in Sudan in recent months, with men often in a minority amongst the crowds calling for President Omar al-Bashir to step down.

Many well-known women activists have been detained since the first wave of protests at the end of last year.

Click here to read the full article published by The Guardian on 9 April 2019.