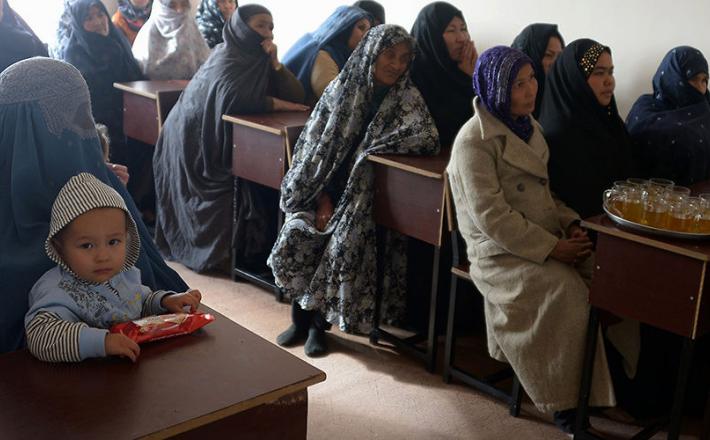 The Islamic State claimed responsibility for a suicide bombing that killed at least 80 people in Kabul in late July, marking the worst attack in Afghanistan in months. With NATO withdrawing from the country and the international community at large gradually disengaging, attacks have been on the rise as the Taliban also aim to regain control of lost territory.

The deteriorating security situation has a particular impact on the lives of Afghan women, who face increasing physical threats and social restrictions as a result of the repressive policies of these militants. While women have come a long way since the end of Taliban rule, harassment continues to be routine, and rape and kidnapping common yet underreported. Female activists seeking change have also been targeted for harsher treatment. While Shariah law is widely interpreted as providing a basis for “fundamental respect for women,” the Taliban reduced it to a regime of medieval punishment and societal suppression that overly controlled the female population.

The Afghan state has also largely failed to protect and provide for women. Prosecution and conviction rates are low for rape and nonexistent for beatings and other abuse. Meanwhile, growing political instability in an already fragile country has created a precarious situation for professional women in particular, many of whom have fled certain areas or maintained low profiles, robbing state institutions and other sectors of their valuable input.

Yet, despite these challenges, women continue to make valuable contributions to efforts to stabilize the country. This was highlighted at a recent meeting at the International Peace Institute (IPI) with key female figures in the Afghan peace and reconciliation processes.

Despite their diverse backgrounds, the women we met with reported encountering similar barriers to participating fully in Afghan society and in creating peace and security in particular. The overarching theme was of the need to fight corruption and provide more education and employment opportunities countrywide, as well as more training for women peacebuilders.

Afghanistan’s southern provinces such as Helmand and Kandahar, from which the women hailed, bear the brunt of corruption, violence, and bad governance in the country. Security forces often fail to respond to calls to protect civilians in these regions, thus triggering a high level of hopelessness among those who are increasingly targeted by militant violence.

Sarina Faizy, a Kandahar Provincial Council member, told us that there was no hope for her area if the violence could not be stopped. “What we want is peace and a bright future,” she said. Ms. Faizy lamented how corruption had greatly hindered delivery of development aid and made assessment of its effectiveness difficult. Afghanistan has indeed seen billions of dollars from international donors that have failed to translate into tangible outcomes in the form of health centers, schools, or other purposes for which it has been allocated.

The women all spoke of the lack of education and professional development opportunities, particularly for young people, as being problematic for advancement. “The women of Kandahar are ready to get educated, but the opportunities are not available,” said Zarghona Baloch, Head of the Peace and Security Institute in the Kandahar, Helmand, Zabul, and Arozgan provinces. A central issue here is that opportunities do not extend beyond the urban centers of Kabul and the surrounding province into southern and rural areas. Ms. Faizal said that from the 17 districts of Kandahar only three or four—those closest to Kandahar city—might have a school.

Lieutenant Colonel Fahima Misbah Panahi, Female Battalion Commander at the Kabul Military Educational Center, focuses on educating female recruits in the country’s armed forces and said the lack of support for women in leadership roles was a major problem. “There needs to be greater budget allocation for women’s issues and leadership opportunities,” she said.

Furthermore, women in Afghanistan—particularly in those same southern and rural areas—do not have a robust knowledge of formal peace processes or how to sustain peace. They require further training in mediation and other related disciplines if they are to play a meaningful role in these processes. Many of the women we spoke with highlighted how the country’s High Peace Council (HPC) provided them no direction on these issues. This is despite the HPC’s intended role of ushering in a new era of peace and stability in Afghanistan from its 2010 founding onward and the fact that women are all members of local peace councils that are key to this process.

In place of a dedicated HPC commitment, women had made their “own efforts, as women, to engage with people who have decided to lay down arms,” Ms. Baloch said. And yet the HPC has still failed to respond to these efforts in any meaningful way. Jamila Niaz, Chief of Helmand province’s Department of Women’s Affairs, reported gathering 13,500 signatures of women who wanted a greater role in creating peace in the province, without receiving an HPC response.

The ongoing political instability and uptick in militant violence—and the increasing drawdown of international actors—mean it is increasingly difficult to make the necessary improvements to women’s lives in Afghanistan, much less create a new breed of women peacebuilders and participants in formal peace negotiations. Yet the cost of not doing so will ultimately be far greater for the country if a concerted effort is not made in this area.

IPI’s own research highlights how critical it is that women play a greater role in creating peace in Afghanistan and elsewhere. A 2015 study shows that women provide more diverse and valuable inputs to peacemaking due to their different security needs and by promoting priorities that challenge dominant state security narratives. The authors of the report found that inclusion of women can “provide key opportunities for major reforms that transform institutions, structures, and relationships in societies affected by conflict or crises.” Furthermore, peace agreements reached with the participation of women are not only more likely to be implemented, but also have a higher probability of lasting longer.

Those efforts to increase women’s involvement in peace processes and peacebuilding efforts already underway in Afghanistan are largely the result of the agency of women themselves. Yet they continue to face a multitude of challenges that require the support of others within and outside the country’s borders. The international community, which has grown increasingly frustrated with the slow progress made in Afghanistan, could play a key role in building up relevant institutions and structures and removing those barriers that continue to halt progress. Click here to read the original story.