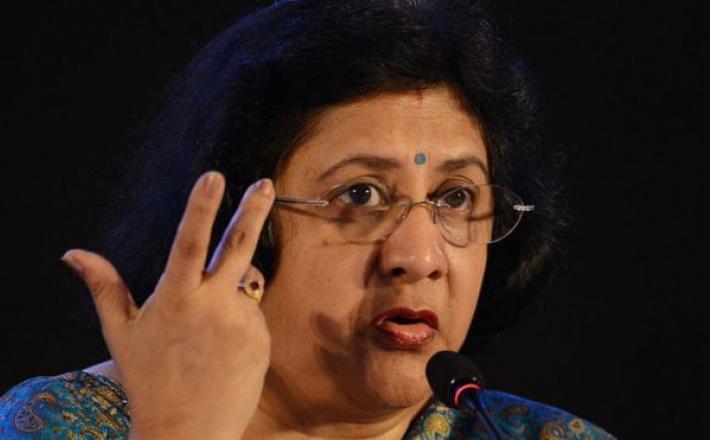 "Things are changing - but I don't think enough has happened."

Arundhati Bhattacharya is talking about the need for more women on the boards of Indian companies. And as the first female boss of India's largest public sector bank, State Bank of India, she knows what she's talking about.

A 2013 ruling making it mandatory for publicly listed firms to have a minimum of one woman director on their boards has helped improve gender diversity, but "we need to stay on it for a few more years for it to have the desired impact," says Mrs Bhattacharya.

While India has done well compared with China and South Korea, it still lags behind other Asian countries such as Thailand and Malaysia.

But there are real advantages to increasing the number of female directors. Mrs Bhattacharya believes that companies with women directors make better quality decisions due to a wider diversity of views.

Her views are echoed by Naina Lal Kidwai, former head of HSBC India, who is currently an independent director on the board of several companies in India.

She says it will take a bit of time for everyone to become comfortable with the new dynamic but says that men are embracing the change.

"Many women directors tell me it hasn't been easy but they are enjoying it. And in many instances, men have been very encouraging - which is a good sign," says Mrs Kidwai.

Like Mrs Bhattacharya, Mrs Kidwai feels that companies should not restrict themselves to just one female director.

"The rule says a 'minimum of one woman' director but I think the ideal number will be two. This will help women have a stronger voice on the board."

India's recent improvements on female representation have partly been driven by the fact that it was starting from a low base.

But another driver has been that many family-controlled companies - the majority of Indian firms - have appointed female family members, like their mothers, wives and daughters as directors.

One example is India's richest man and chairman of Reliance Group, Mukesh Ambani, who appointed his wife Nita Ambani to the company board in 2014. Other big private corporations that have followed suit include Raymond Group and Godfrey Phillips.

Pranav Haldea, managing director of research firm Prime Data, says many companies have done this just to comply with the new rules.

"Women directors who come from the family have no voice on the board. In some cases, firms have also appointed independent directors, who may not be from the family but have friendly relations with the promoter," he says.

Mrs Kidwai is not too concerned about this. She believes that women in family-controlled businesses have remained on the sidelines because of the patriarchal mindset of Indian society, and says their board induction will give them a chance to prove that they are also capable of running a company, just like their husbands and brothers.

"It's taken for granted that the son will inherit the business but now the daughter in the family will also get a chance to prove her mettle. And this may have a positive impact on succession planning in the future," she says.

While India has made progress in appointing females to board positions, this hasn't been matched by the number of women in senior management posts.

Mrs Bhattacharya says the main reason for this is that many women quit or drop out midway through their careers to take up responsibilities at home.

"In India, women are still considered the primary caregivers. And it is expected that they will be the ones to sacrifice [their careers] if someone is needed to look after the family."

Between 2005 and 2014, the number of working-age Indian women with a job dropped by 10%, according to data from the International Labour Organization. The drop was the largest of any country in the world during that period.

While a handful of companies have introduced flexible working hours to help women juggle their responsibilities at home and work, at some stage most women face a difficult choice between career and family responsibilities.

"Women feel more guilt as compared to men while taking that decision. At the core of it all is guilt. Women need more support systems," says Mrs Kidwai.

Nearly 10 million people are entering India's job market every year and nearly half of those are women.

Without that support - which includes men taking up more responsibilities at home - it's unlikely that India will realise its ambition of becoming an economic superpower.