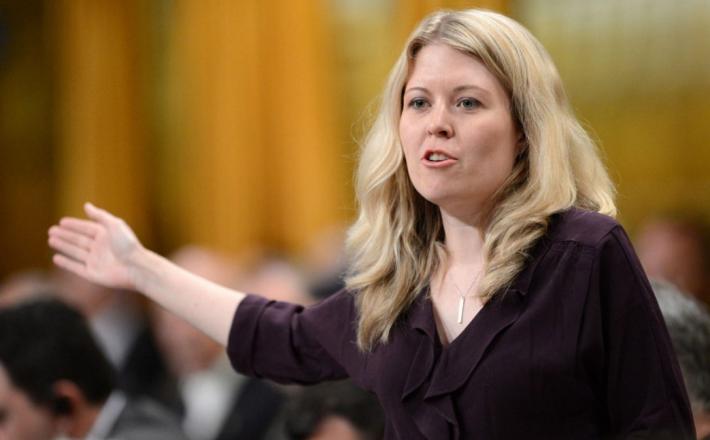 Female MPs are applauding one of their colleagues for writing a scathing op-ed that sheds light on the routine discrimination endured by women in politics.

In an opinion column, Michelle Rempel, the Conservative MP for Calgary Nose Hill, recounted what she described as the “everyday sexism” she has experienced. She wrote that the biased treatment she receives includes being talked down to by male colleagues, being labelled a “bitch” if she takes a strong stand during an argument, and “my ass being occasionally grabbed as a way to shock me into submission.”

She described how one male MP told her he wanted to wait to speak with her about an issue until she was “less emotional” and advised her to “(be) nicer in the future.” When she made a request of another MP, Rempel wrote in the National Post column on Monday, he responded by saying, “It turns me on when you’re direct.”

Rempel didn’t name the MPs involved, and it’s not clear whether the incidents she described all happened on Parliament Hill, or if they involved politicians or members of the public. When reached by phone Tuesday, Rempel declined the Star’s request for an interview, saying she wanted the article to speak for itself.

Prime Minister Justin Trudeau, who has won international plaudits for declaring himself a feminist, said he is talking to his people about Rempel’s complaints. In the last Parliament, Trudeau expelled two MPs from his caucus after they were accused of misconduct by colleagues.

In the column, Rempel, who was appointed as the Conservative immigration critic last year, wrote that it shouldn’t be left to women to call out misogyny. “The responsibility for combating everyday sexism doesn’t lie with those who live with it,” she wrote,” arguing that people who harbour biases against women should own up to their views.

Rempel’s female colleagues and former rivals from other political parties commended her for the piece.

“It was the talk of the day,” said NDP MP Ruth Ellen Brosseau.

Brosseau agreed that more than a year after two NDP MPs came forward with allegations of sexual misconduct against Liberal MPs, sexism remains a problem in Ottawa.

Those allegations against Liberal MPs Scott Andrews and Massimo Pacetti led to the pair being booted from caucus, and sparked a wider debate about gender bias on the Hill. Both men denied the allegations.

New sexual harassment policies for MPs and their staffers were adopted in December 2014.

Brosseau, who represents the Quebec riding of Berthier-Maskinongé, said she and other women in federal politics have experienced the kind of bias that Rempel described. “I have women colleagues, and I know a lot of staffers have had similar things happen. It’s important that we deal with it.”

“Everyone says, it’s 2015, it’s 2016,” she said, in a reference to Trudeau’s much-quoted answer as to why he appointed a gender-balanced cabinet last year. “This has to stop.”

“I think that there is sexism in Parliament,” said Carolyn Bennett, minister of indigenous and northern affairs. As one example, Bennett told reporters that female MPs are often subjected to “personal attacks” in the House of Commons. When male parliamentarians are heckled it’s usually about the topic at hand, she said, but she’s been told to “lay off the coffee or take a Valium.”

The problem of sexism in Canadian politics is hardly new. Sheila Copps was elected as a Liberal MPP for Hamilton Centre in 1981, and became deputy prime minister under Jean Chrétien’s government in 1993. In November 2014, she revealed that she had been sexually assaulted by a legislator more than 30 years ago.

She told the Star that in her early career she was conscious of her male colleagues’ sexism on a daily basis. “When I first went to Parliament, I was one of only six women in our caucus,” she said, adding that she believes the situation has improved as more women have been elected.

“The more women you have, the more people are cognizant” of sexist behaviour, she said.

A spokeswoman for Equal Voice, a non-partisan group that advocates for more women in government, said that sexism is likely to persist in Parliament until the male dominance of Ottawa is overturned. Nancy Peckford pointed out that only 26 per cent of Canada’s 338 MPs are women, and only a third of candidates in the last federal election were female. At the current rate of progress it would take 90 years to achieve gender parity in the House of Commons, she said.

“Without some really concerted and sustained efforts, in an environment that remains predominately male, there is no doubt that the culture remains challenging for many women,” she said.

Peckford agreed that the sexual harassment policy instituted in December 2014, which provides MPs and political staffers with formal and informal procedures for handling complaints, and Trudeau’s decision to appoint a cabinet with an equal number of men and women are “meaningful measures.”

“But they don’t address entrenched cultural norms or attitudes towards women in any systematic way.”