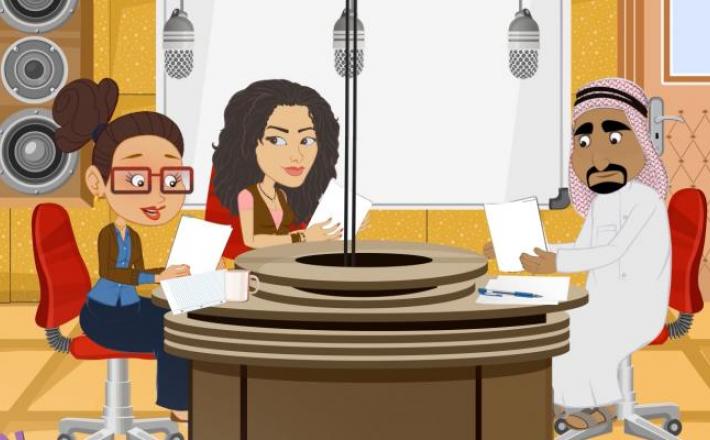 "Fiction can be an engaging, non-confrontational way to set the scene for constructive conversations, even on the most serious issues. We hope that Be 100 Ragl II can help enlighten men and women on how to build a more just and equal society together." - Antonella Notari Vischer, Executive Director, Womanity Foundation

Building on the Be 100 Ragl I radio series of 2013-2014 - a soap-opera chronicling the adventures of Noha, an intrepid radio journalist fighting for social justice - Be 100 Ragl II is an animated cartoon series created by the Womanity Foundation. (See Related Summaries, below, for more on Be 100 Ragl I.) Be 100 Ragl ("Worth 100 Men" in English) aims to engage Arab societies in an open and constructive debate on women's rights and their role in society by providing information, increasing awareness and knowledge, challenging stereotypes, and offering a variety of perspectives, thus creating favourable attitudes - and behaviours - towards women's advancement - all by means of entertainment.

Be 100 Ragl II was launched on July 3 2016 on Shahid.Net, a free video-on-demand service in the Middle East and North Africa with an average of 13.3 million monthly visitors. The series will similarly air on Kharabeesh, an Arabic network on YouTube, which has approximately 700,000 subscribers from the 22 countries of the Arab World as of this writing. It can also be followed on the Be 100 Ragl Facebook page and the Be 100 Ragl website.

Be 100 Ragl II follows Noha, voiced by the actress and producer Saba Mubarak as she moves to Dubai to pursue her career as a radio journalist and presenter. In Dubai, Noha, along with her colleagues, produce and present a radio programme that chronicles the real stories of Arab women while proposing creative ways to further empower them. Alaa Wardi created the theme song and music video as a regional anthem for women's empowerment.

The plot for the animated series was crowd-sourced from the real-life experiences of Be 100 Ragl's Facebook fans and was vetted by an expert advisory panel. In 10 episodes, new perspectives are offered on a wide range of social issues, including women's social, educational and economic empowerment, domestic violence and sexual harassment, early marriage, and political participation.

In addition to online conversations, the Womanity Foundation is partnering with a range of grassroots organisations to host a Be 100 Ragl Tour. The tour will take the fiction series across the Middle East and North Africa throughout 2016 and will encourage a live debate, in partnership with local organisations, on the key topics animated by the episodes. Through a mix of online and community-based debates, Womanity is looking to challenge audiences to develop creative solutions to women's and societal issues.

Womanity is a private philanthropic foundation established in 2005 in Switzerland and registered in the United Kingdom, Afghanistan, and the United States. It works around the world to empower girls and women to shape their future and accelerate progress in their communities. In 2009, Womanity, in collaboration with the NISAA Broadcasting Company, established NISAA FM, "the first commercial radio station in the Middle East for and by women, broadcasting on FM in the Palestinian territories and throughout the world" from its website. Access here the original content.