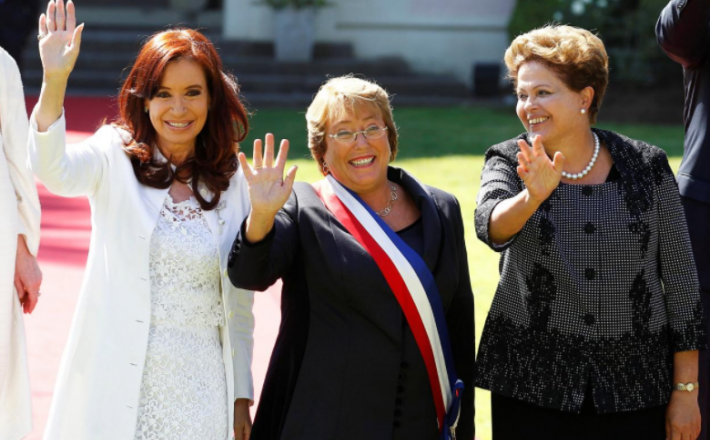 SANTIAGO (Reuters) - When Chile’s President Michelle Bachelet leaves office in March, it will mark the end of a generation of women leaders in Latin America, leaving the region without a female head of state as it shifts to the right politically.

At the start of this decade, women held the top jobs in Argentina, Brazil, Costa Rica and Chile, collectively representing about 40 percent of the population in a region better known for its machismo.

But conservative Sebastian Pinera’s victory in the second round of Chile’s presidential election on Sunday drew that period to a close.

Bachelet was the first of her female counterparts to rise to power in a leftist tide that swept South America during a commodities-fueled economic boom. She served as president from 2006 to 2010 before winning re-election in 2013.

Together with Brazil’s Dilma Rousseff and Argentina’s Cristina Fernandez, Bachelet embodied the major strides made by women across a region that has passed laws deterring rampant violence against women and set quotas for political participation that have given Latin American women a bigger share of parliamentary seats than in Europe.

But now some worry that progress on women’s rights could stall.

“We’re seeing a shift to conservative politics that is questioning the advances of the last 15 to 20 years,” said Eugenia Piza-Lopez, who works on gender in Latin America for the United Nations Development Program.

Click here to read the full article published by Reuters on 19 December 2017.