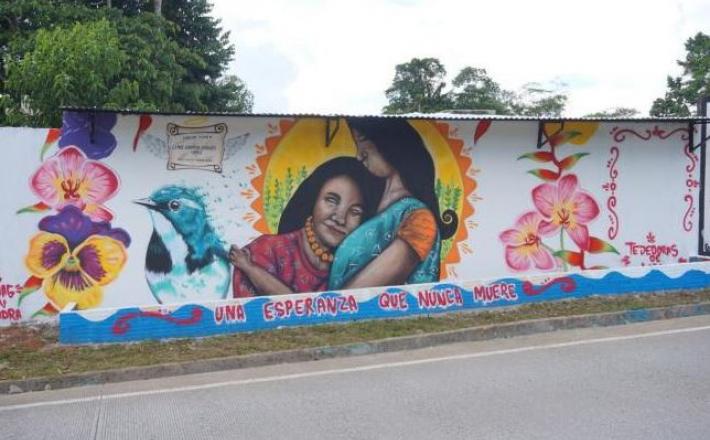 In Colombia’s southern province of Putumayo, a group of women is stitching together social fabric despite an alarming number of ongoing threats and acts of violence against them.

Fifteen days before her wedding in 1990, Sandra* was kidnapped and raped at gunpoint by armed men. She survived the attack, and today works with the Alianza de Mujeres Tejedoras de Vida (Alliance of Women Weavers for Life), a coalition of grassroots women’s associations across the 13 municipalities of the department of Putumayo, Colombia.

Based in the municipality of San Miguel on the border with Ecuador, Sandra in one of many victims of Colombia’s armed conflict. In 2014 a friend took her to an Alianza meeting, where she “began listening to other stories of women’s resistance in this violent territory.”

Women leaders founded the Alianza in 2005 amid staggering levels of violence in the hopes of uniting “feminine force” to rebuild the social fabric of communities after years of terror. It today serves as an example of resistance in the face of the current reconfiguration of Colombia’s armed conflict by empowering women to denounce crimes, providing them with economic opportunities, and teaching them how to become peacebuilders in their communities.

Sandra participated in the peacebuilding program through Alianza and is now a Peace Mediator, where she works to promote the Alianza in both urban and rural spaces. Her involvement has made her a target. After receiving threats from both FARC dissidents and local paramilitaries, she now travels with a state-provided armed bodyguard. “In May they came to my house… and pushed their way in… They told me I had to join them or they were going to kill me and my daughters.” Later, a paramilitary group followed and threatened her because of her community leadership, she said.

Click here to read the full article published by WUNRN on 6 April 2019.