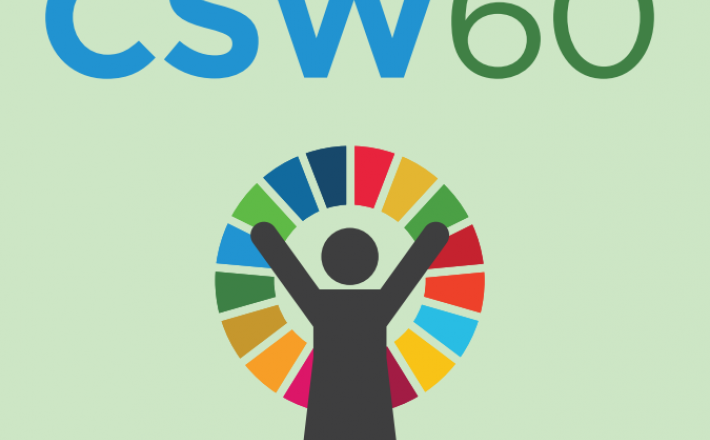 Every year in March, representatives of Member States, UN entities, and civil society organizations from all regions gather at the United Nations Headquarters in New York for the Commission on the Status of Women (CSW) to evaluate progress on gender equality, identify challenges, set global standards and formulate concrete policies to promote gender equality and the advancement of women worldwide. The CSW is a functional commission of the United Nations Economic and Social Council (ECOSOC) that acts as a global policy-making body exclusively dedicated to advancing gender equality and the empowerment of women and girls. Participants gather annually to discuss progress and gaps in the implementation of the 1995 Beijing Declaration and Platform for Action, the key global policy document on gender equality, as well as emerging themes that affect gender equality and the empowerment of women. This year, just a few days after International Women’s Day on March 8th, the sixtieth session of the Commission on the Status of Women (CSW60) started on March 14 and will be running until March 24, 2016. The CSW60’s priority theme is women’s empowerment and the link to sustainable development while its review theme is the elimination and prevention of all forms of violence against women and girls.

As the United Nations organization dedicated to gender equality and the empowerment of women, UN Women serves as the substantive Secretariat of the Commission and in that capacity, supports all aspects of the Commission’s work. UN Women prepares the evidence-base, policy analysis and recommendations that support the Commission’s deliberations on the themes selected for each session, as well as for negotiated outcomes.

Various stakeholders took the opportunity of this global gathering to organize and host thematic events to shed light on critical aspects of their work on gender equality across regions. This was also an opportunity for iKNOW Politics’ partners to collaborate in the organization of events focused on common areas of work. For example, the Inter-parliamentary Union (IPU) held its annual parliamentary day meeting in cooperation with UN Women on March 15 around the Power of Legislation for Women’s Empowerment and Sustainable Development. The event gathered women parliamentarians and other stakeholders and focused on areas for future priority action, with particular emphasis on the role of parliaments in implementing and enforcing equality and non-discrimination laws. 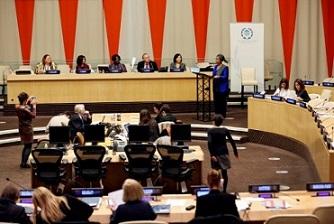 Furthermore, the International Institute for Democracy and Electoral Assistance (International IDEA) and the United Nations Development Programme (UNDP) co-organized an inter-regional workshop on regional organizations and the promotion of gender equality and the political empowerment of women on March 17. The main goal of this gathering was to discuss the role of regional organizations in advancing gender equality and to formulate policy recommendations on how to improve their work and to build partnerships with UN and civil society actors. When discussing the tools available for improving women political participation, iKNOW Politics was cited as an example of a good practice. iKNOW Politics took part in these two day-long events and many others related to the subject of political participation of women and women empowerment by covering the meetings on social media and conducting interviews with women politicians, including women MPs from Kenya, Mauritania, Chile, Canada, Jordan, Tunisia and the European Parliament. All interviews will be posted here soon. 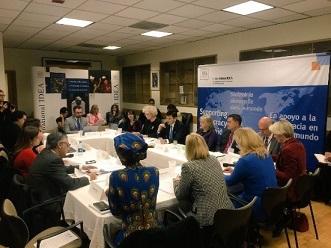 On March 22, iKNOW Politics organized a Brown Bag Lunch at the Headquarters of UN Women in New York with the Norwegian politician, researcher, civil servant and former UNICEF and UNESCO official Torild Skard. Ms Skard served as Member of Parliament for Akershus, President of its Upper Chamber and Deputy Chair of the Standing Committee on Justice. She was President of the Norwegian Association for Women’s Rights and has written several books on women’s rights and political participation. Torild Skard’s latest book Women of Power (2014), was awarded the Outstanding Academic Title for 2015 by CHOICE, the US Library journal. Women of Power details 73 female presidents and prime ministers from 53 countries and incorporates the history of female leaders into that of the women’s liberation movement. During the meeting, Torild Skard shared her insights about these women leaders and illustrated key moments of women’s breakthroughs in politics. 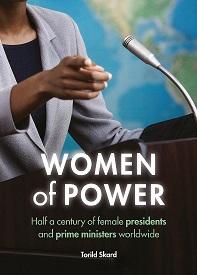 For the first time ever, this year’s session was preceded by the CSW Youth Forum. Organized by UN Women, YWCA, the UN Inter-agency Network on Youth Development's Working Group on Youth and Gender Equality and partners, the two-day forum gathered over 300 participants from all over the world who are active and engaged in the implementation of the 2030 Sustainable Development Agenda and specifically in achieving gender equality. The key outcome of the two-day meeting was the development of a set of “Youth-Agreed Conclusions” for the implementation of the 2030 Agenda, which was presented to the Chair of the CSW60, Brazilian Ambassador to the United Nation in New York H.E. Antonio de Aguiar Patriota. 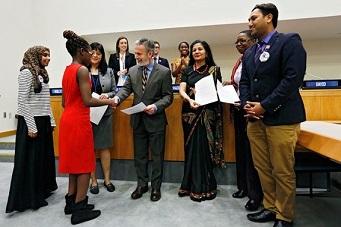 The inaugural session of the CSW60 was marked by the United Nations Secretary General Ban Ki-moon who mentioned the importance of increasing the individual efforts of Member States in advancing women’s political participation and leadership, especially those who completely exclude women from their decision-making bodies: “I take this opportunity as Secretary-General of the United Nations to make a personal appeal: I urge action by all those leaders of countries where not even a single woman is in the parliament or cabinet to end this injustice... I am not going to disclose the names of the countries today but I am urging them: [you] know who you are”. 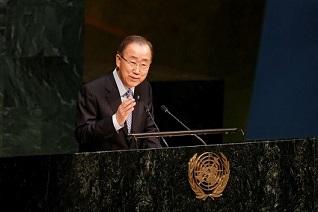 The nine-day session has included a ministerial segment with round tables and other high-level interactive dialogues. For example, the High-Level Panel on Women’s Economic Empowerment, which was announced at the World Economic Forum in Davos in January, held its inaugural meeting during the CSW60 on March 15, 2016. The Panel is expected to provide recommendations linked to the 2030 Agenda for Sustainable Development (SDGs) on how to improve economic opportunities for women and promote their leadership in driving sustainable, inclusive and environmentally sensitive economic growth.

During a High-level event on March 16 on how to achieve gender equality, the Prime Minister of Canada Justin Trudeau and the Executive Director of UN Women Ms. Mlambo-Ngcuka highlighted that the efforts to reach gender equality need to involve everyone in society, not just women. Stressing on the importance of including men in the battle of achieving gender equality, the Canadian Prime Minister told the audience: “I’m going to keep saying loud and clearly that I am a feminist until it is met with a shrug… it shouldn’t be something that creates a reaction. It simply is saying I believe in the equality of men and women, and I believe we still have an awful lot of work to do to get there”. 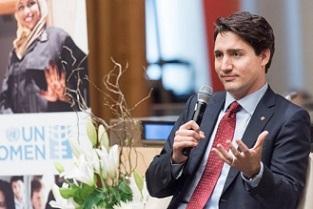 Organized by the UN Department of Political Affairs and hosted by the Permanent Mission of the Netherlands to the UN, a side event on the role of women in the Security Council took place on March 16, 2016. Overall at the UN, the number of women ambassadors has increased from 31 in 2014 to 37 today, out of 193 Member States. While the number of female diplomats at the UN is becoming more balanced overall, the number of women ambassadors in the Security Council has fallen from its peak of six women in 2014 to four in 2015 and to one this year. The discussion panel was composed of Ambassadors Dina Kawar of Jordan, Raimonda Murmokaite of Lithuania, Sylvie Lucas of Luxembourg and Samantha Power of the United States. 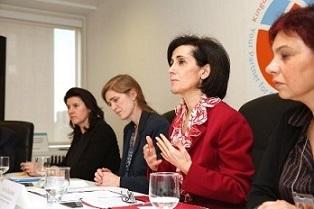 Three of the world’s worst humanitarian crises in the world are in the Arab Region. Amid the chaos, women are struggling, not only to cope with their conflict-affected lives, but also to sit at the peacemaking tables and make their voices heard. On 15 March, another side event featured a rich discussion by Arab women activists from Karama, an Arab women’s network for peace and security, about women’s contribution to the peace building processes across the region. Last year, a diverse and geographically representative group of Libyan women activists joined their efforts in presenting the Libyan Women Action Plan for Peace and their shared vision to the international community at the Palais des Nations in Geneva. Click here to read iKNOW Politics’ recent e-discussion on women, peace and security in the Arab states.

The “Egyptian Women in Political Decision Making” side event took place on March 16 at the UN Women headquarters in New York. Among the panels we find Ms Maya Morsy, President of the National Council for Women in Egypt; Dr Magued Osman, CEO and Managing Director of Baseera, the Egyptian Center for Public Opinion Research; Ms Mervat Tallawy, Egyptian diplomat and Director General of the Arab Women's Organization; Dr Heba Hagrass, MP and advocate for the rights of persons with disabilities in Egypt; and Mr Yannick Glemarec, UN Women’s Deputy Executive Director for Policy and Programme. With 89 women MPs in Egypt’s new parliament, female representation in the country’s parliamentary history reaches a record. Building on the results, the event highlighted the recent gains of women in political participation and leadership after the recent election. It also stressed on the role of National Council for Women in Egypt in capacity building and support for women running for office and the women in parliament.

The Women in Parliaments Global Forum (WIP) held a side event in partnership with the Permanent Mission of Germany to the UN on why and how to increase the number of women in political leadership. The launch of the exhibition of the WIP Leadership Campaign followed the side event. It showcases the testimonials of more than 50 male Presidents and Prime Ministers by having them complete the sentence: “We need more women in Parliaments and as political leaders because…”.

Commission on the Status of Women: unwomen.org/en/csw