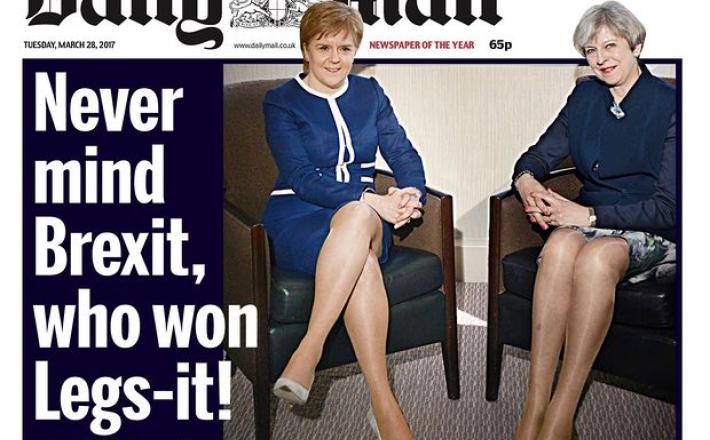 Politicians join public in condemning and ridiculing newspaper headline that leers at Nicola Sturgeon and Theresa May.

A Daily Mail front page that declared “Never mind Brexit, who won Legs-it!” next to a photograph of Scottish first minister Nicola Sturgeon and British prime minister Theresa May has prompted widespread outrage.

Inside the paper there was was more ogling at the female leaders, with a headline reading: “Finest weapons at their command? Those pins!” A column by Sarah Vine referred to Sturgeon’s legs as “altogether more flirty, tantalisingly crossed … a direct attempt at seduction”.

The front page, which appeared on Twitter on Monday night, met with instant criticism from politicians and the public.

Among the first to criticise the front page as sexist and offensive were the Labour MPs Harriet Harman and Yvette Cooper. Tony Blair’s former spin doctor, Alastair Campbell, labelled the paper “utter scum” and urged anyone who spotted a copy of the Mail to rip it up The former Labour leader Ed Miliband tweeted: “The 1950s called and asked for their headline back.”

Click here to read the full article published by The Guardian on 28 March 2017.