Democracy Without Women is Impossible

Democracy Without Women is Impossible 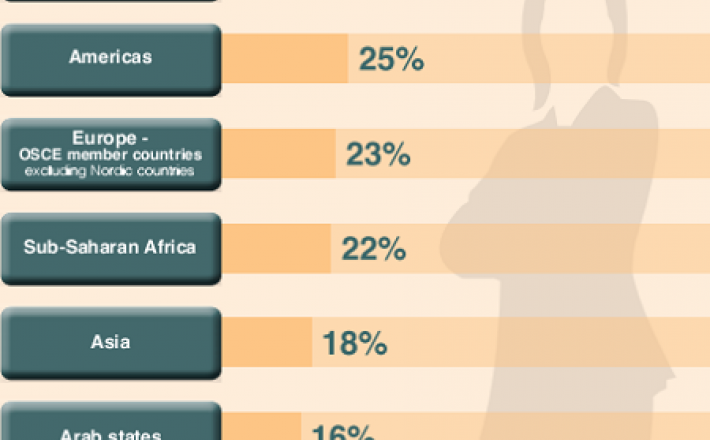 Though half of the world's population, women continue to be under-represented as voters, party leaders and elected officials. Just over 20 percent of parliamentarians worldwide are women. Yet evidence is strong that as more women are elected, countries experience higher standards of living; the priorities of families, women and minorities are addressed; and confidence in democracy goes up. In places as diverse as Croatia, Morocco, Rwanda, South Africa and Timor-Leste, having more female lawmakers led to legislation related to anti-discrimination, domestic violence, inheritance and child support.

Empowering women in politics has been a mission of NDI since its founding. The Institute works with women in parliaments, civic organizations and political parties to help them build the skills to take a greater political role. Parties, the primary gateway for women to elective and leadership positions, often have complex hierarchies and entrenched leadership that hold women back. In parliamentary systems, women are often placed low on party lists so they are unlikely to be elected or are excluded from leadership positions and platform development. NDI programs support party reform to remove barriers so women can become leaders and ultimately achieve elective office. Read more about NDI's approach to women's political participation»

In Guatemala, indigenous Mayan women make up 20 percent of the population but are largely left out of the political process. When Teresa de Jesús Chocoyo, an indigenous woman, first ran for a legislative seat, she lost. But she persisted. Courses she had taken at NDI's Indigenous Women's Political Academy helped her create a campaign that resonated with citizens, and she used those skills to stay active in her political party. Her dedication led President Otto Pérez to nominate her as governor of Sacatepéquez department. She was one of three women — and the only indigenous woman — appointed to a governorship that year. Chocoyo has taken a hands-on approach to governing and hopes to serve as an example to other women who aspire to political office. "Take the risk to run for office," she told the crowd at her inauguration. "Women must persevere. Read more about NDI's programs in Guatemala»

In Nepal, four civic organizations, with NDI support, formed the Committee for 33 Percent Women to help overcome a decision by party elders that would reduce the number of women in the national Constituent Assembly, which had been 33 percent in the last parliament. The decision, affecting the 2013 elections, was particularly important because the assembly would be responsible for drafting a new constitution. The committee produced radio and television ads about the need for more women in government to make it more reflective of society, and it published a full-page ad in Nepali newspapers that supported the campaigns of 646 women running. Democracy and Elections Watch, a citizen monitoring organization, used street theater and voter education at women's festivals to encourage women to vote. NDI held training programs for the candidates. When the new assembly was seated in 2014, women had much to be proud of. They occupied nearly 30 percent — 172 of 575 — contested seats. Read more about NDI's programs in Nepal»

In Georgia, NDI worked with 14 political parties to sign the Win with Women Global Action Plan, which recommends internal reforms to boost women's participation. One party established a women's committee to oversee gender issues; another amended its charter to make the head of the women's wing a voting member of the party's decision-making body. In 2011, NDI organized a visit to Stockholm for Georgian party leaders to expose them to methods used in Sweden to increase the number of women on party lists and in leadership positions. After their return, one MP proposed an amendment, passed in 2011, that provided up to 10 percent more state funding for parties whose candidate lists included at least 20 percent women. In the 2012 parliamentary elections, parties put forth the most women candidates in Georgian history. Eighteen won, nearly doubling the total number of women elected to parliament. Read more about NDI's programs in Georgia»

The Madeleine K. Albright Grant, established in 2005, helps grassroots organizations pursue initiatives that promote women's roles in political and civic life. Recipients of the annual $25,000 grant have included the Network of Support for Women Municipal Leaders (REAMM) of Mexico, the Women's Discussion Club of Kyrgyzstan, the Chocó Women of Colombia, the Women's League of Burma, the 50/50 Group of Sierra Leone, the Mostar Women's Citizen Initiative of Bosnia-Herzegovina and the Women's Political Caucus of Indonesia. Read more about the Albright Grant». Click here to access NDI's webpage.