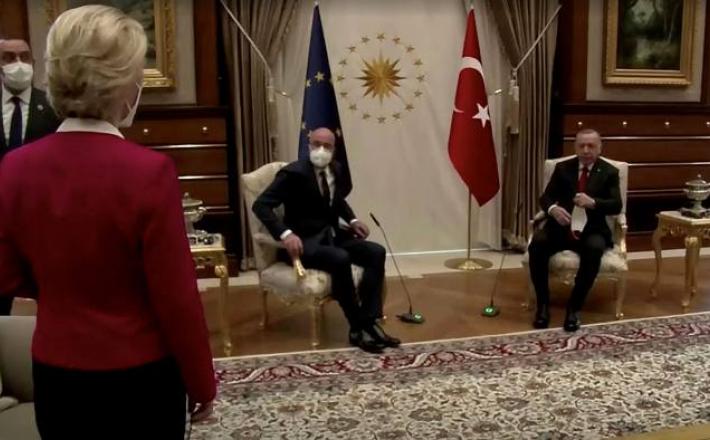 Dispute over protocol prompts charges of sexism at meeting in Ankara

Turkey and Europe are trading blame over who left the European Commission chief on her feet, in a spat over protocol that has prompted charges of sexism and overshadowed a critical meeting.

Ursula von der Leyen, European Commission president, was caught off guard when European Council president Charles Michel and Turkish president Recep Tayyip Erdogan sat in armchairs next to each other — leaving her to sit alone on a sofa opposite Mevlut Cavusoglu, the Turkish foreign minister.

The awkward moment, caught on video at Turkey’s presidential palace in Ankara, came ahead of talks between the EU officials and Erdogan that both sides wanted to depict as a “new momentum” in an often acrimonious relationship.

The EU’s Michel, who in the video glances at von der Leyen but remains in his armchair, blamed Turkey for the diplomatic mishap. “The strict interpretation of the protocol rules by the Turkish authorities gave rise to a distressing situation: the differentiated — even inferior — treatment of the president of the European Commission,” he said in a Facebook post late on Wednesday.

Click here to read the full article published by the Financial Times on 8 April 2021.