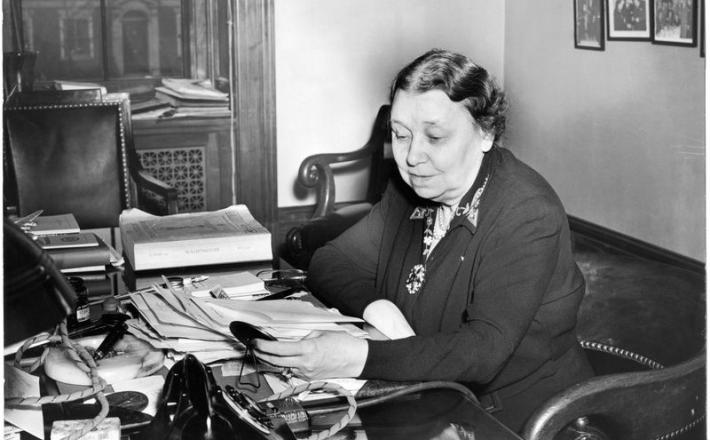 The first woman elected to the United States Senate is not a household name. That woman, Hattie Wyatt Caraway of Arkansas, kept a very low profile. She is not considered a political trailblazer. Indeed, she voted with the rest of the Southern delegation against the Anti-Lynching Bill of 1934, intended to make lynching a federal crime. But though her name has become a historical footnote, Caraway, who was born in the shadow of post-Civil War Reconstruction and died at the dawn of the atomic age, offers a fascinating study in the challenges facing women in American politics.

Caraway won a special election to the Senate in 1931 after the death of her husband, Democratic Senator Thaddeus Caraway. This was not without precedent for a politician’s widow, because the move allowed the “real candidates”—the men—time to prepare their campaigns. But Caraway, at age 54, shocked the powers-that-be by announcing her plans to run in the 1932 general election.

In making the decision to run for a full term in the Senate, she knew she was breaking new ground for women. Until Caraway’s election, only one other woman had even set foot in the Senate, the self-styled “World’s Most Exclusive Club;” in 1922, 87-year-old Rebecca Felton had been allowed to sit in the chamber for a day as reward for her political contributions in Georgia. Though the 19th Amendment guaranteeing American women the right to vote had been ratified, the idea that government was a man’s sphere had not changed much since abolitionist and women’s rights advocate Sarah Grimké visited the U.S. Supreme Court decades earlier in 1853. After Grimké was invited to sit in the Chief Justice’s chair, she stated that someday the seat might be occupied by a woman. In response “[t]he brethren laughed heartily,” she later recounted in a letter to a friend.

Click here to read the full article published by the Smithsonian Magazine on 2 January 2019.