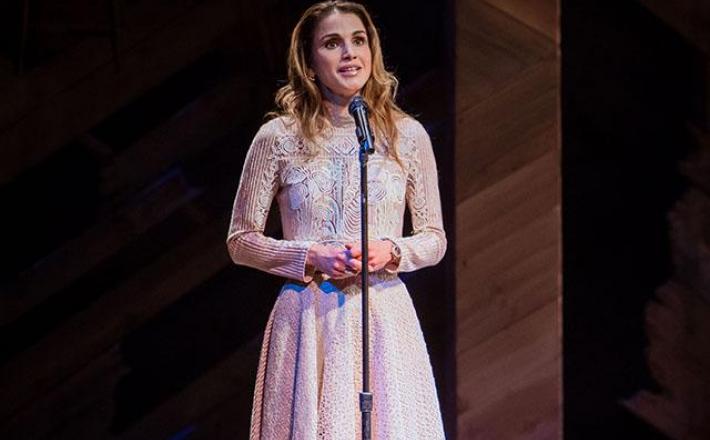 Her Majesty Queen Rania on Monday urged greater support for education in conflict zones, and called for forging partnerships among girls and women around the world to advance this cause.

She made these remarks during a working visit to New York with His Majesty King Abdullah.

The Queen spoke at an event organised by “Let Girls Learn”, a global initiative launched by US First Lady Michelle Obama to help give girls everywhere greater access to education.

Recognising that education is a major casualty of armed conflict, Queen Rania called for efforts to turn the tides of tragedy and desperation in war-torn regions, according to a statement from Her Majesty's office.

“Today, more than 13 million children — half of them girls — are shut out of schools,” the Queen warned.

“For girls in Yemen, schools could be shelled while they study; their classmates killed. Girls in South Sudan live with the threat of kidnapping — in school. And for girls in Syria, fear drives them to desperation — abandoning classes, running through the night, to an unknown and uncertain future,” Her Majesty explained.

“I cannot remember a bleaker, or more heartbreaking time in my region.”

In a region submerged in conflict, where education cannot be taken for granted; however, young girls are going against the odds to live normal lives, according to the Queen.

“What gives me hope is that — despite the traumas they’ve been through — so many girls in my region refuse to let conflict define their lives. Rather, they defy it,” Queen Rania asserted. Rather than pity, she said, it was admiration and support that they needed from the world.

Her Majesty shared the story of 15-year-old Fatima, a Syrian girl living in the Zaatari Refugee Camp, some 90km northeast of Amman, who was forced to abandon her home to flee the violence in Syria, but never stopped fighting for her education, or let war break her spirit.

“When she noticed that many girls in the refugee camp were dropping out of school to get married, Fatima went straight to their parents and gave them lessons on why it was crucial that they let their girls learn,” the Queen said.

“Because Fatima knows that education endures. Rich or poor, in conflict or in peace, no one can take your education away from you,” she added, explaining that while many trends change, education remains an asset forever.

Her Majesty also recalled the story of a 10-year-old Jordanian girl named Bushra, who made it her mission to help a Syrian refugee who had missed years of school because of the conflict, pass her exams.

“I call this the reverse domino effect, where one woman, or girl, lifts another up,” the Queen said.

“One by one, women and girls the world over stand tall and strong, together.”

The Queen thanked the US first lady for organising the Let Girls Learn event, and for helping keep girls’ education under the global spotlight.

The event, hosted by American comedian Stephen Colbert, was attended by an audience of hundreds, including foreign dignitaries. Click here to access the source of this news story.