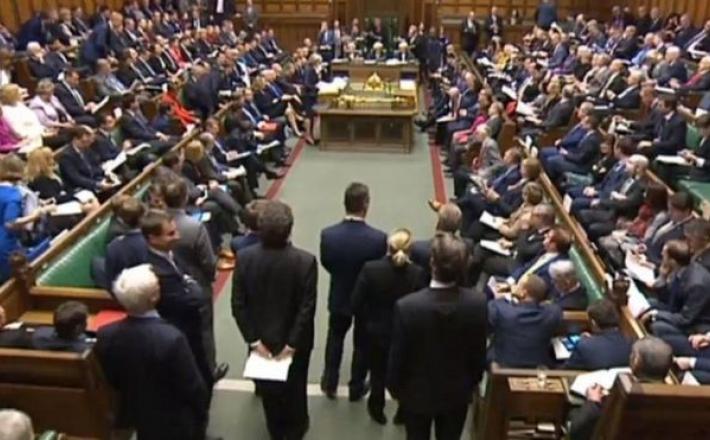 Political parties must face fines if they do not ensure at least 45% of general election candidates are female, MPs have recommended.

The Women and Equalities Committee said the fact that 30% of current MPs were women represented a "serious democratic deficit", for "no good reason".

It said the law must change after the 2020 general election, if that figure "does not increase significantly".

The government said it was considering the recommendations.

There are currently 195 women in the House of Commons. The cross-party committee's report said the meant the UK was ranked 48th in the world, in terms of female representations in equivalent institutions.

Women in the House of Commons

"Women make up more than half the population of the United Kingdom and, at a time when more women are in work than ever before, there is no good reason why women should not make up half of the House of Commons," it said.

"Yet only 30% of MPs are women. This constitutes a serious democratic deficit."

Until 1997, the proportion of women in the Commons was below 10%, rising to 18% at that year's general election.

But the committee said this was not enough progress and that Parliament should "actively encourage women to participate in democracy" through outreach projects and remove "barriers to women's participation".

However, it added: "Political parties have the primary responsibility for ensuring that women come forward to represent them and that they are put in positions from which they can win seats."

House of Commons Library figures showed that, at the 2015 election, all the largest parties' candidate lists were less than 50% female.

The report said that "the government should be prepared to legislate to achieve parity among candidates, including setting out financial penalties for under-performance, if voluntary measures do not bear fruit".

Parties should "explicitly identify winnable seats and adopt ambitious targets for women candidates in those seats", it added.

The committee said: "We recommend that the government should seek to introduce, in legislation in this Parliament, a statutory minimum proportion of female parliamentary candidates in general elections for each political party.

"While the goal is equality, we recognise the difficulty inherent in setting this statutory minimum at 50%. Such a precise target would be difficult to meet while also ensuring that men did not become underrepresented.

"A minimum of 45% would therefore be acceptable. The measure would need to be subject to a minimum threshold for parties contesting only a small number of constituencies.

"This measure should be brought into force if the number and proportion of women MPs fails to increase significantly after the 2020 general election."

A representative of the Office of the Leader of the House of Commons said: "The government is considering the report and will respond in due course."