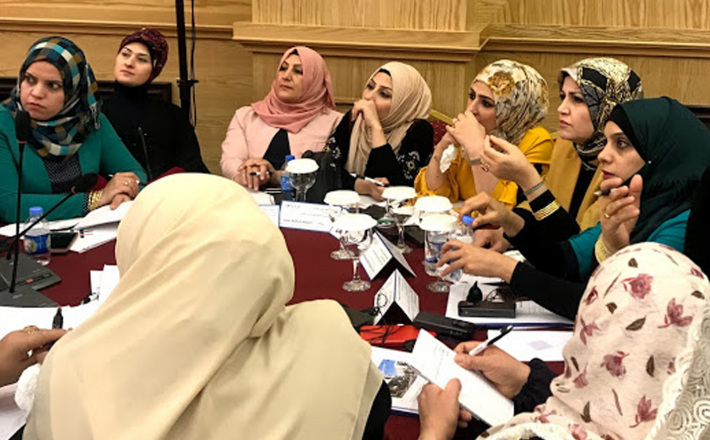 Nearly two years after the defeat of the Islamic State in Iraq and Syria (ISIS), communities are working to rebuild, and local governments are challenged to respond to citizens’ needs in order to win their trust. Yet, decision-makers often overlook the perspectives of Iraqi women, who have disproportionately suffered from conflict and who, as caretakers in their households, have a deep understanding of their families’ and communities’ needs. Now, women leaders in five provinces liberated from ISIS are uniting to advise their provincial councils on how to implement policies that would improve the lives of all citizens, especially the most marginalized.

In September, the National Democratic Institute (NDI) convened a select group of women from Anbar, Diyala, Kirkuk, Ninewa and Salahaddin to launch Women’s Advisory Boards (WABs), independent committees that will provide policy recommendations, as well as implement local projects, in order to promote gender-sensitive problem-solving. Each of the five WABs, one in each province, is composed of about 17 women from all walks of life⁠ – teachers, lawyers, health professionals, NGO workers, businesswomen, housewives⁠ – whose backgrounds embody the vibrant cultural diversity of Iraq. They are already actively making a difference, from helping internally displaced persons, to campaigning against gender-based violence, to advocating for the rights of people with disabilities. Their ultimate goal is to help create inclusive provinces where women and girls, youth and elderly, people with special needs, and religious or ethnic minorities can sustain their livelihoods, access education and healthcare, and move freely and safely, without fear of violence or discrimination.

“This new experience of Women Advisory Boards in Iraq will help elevate women's voices in the provinces,” said a woman from Anbar, recognizing the importance of her efforts.

Click here to read the full article published by NDI on 1 October 2019.