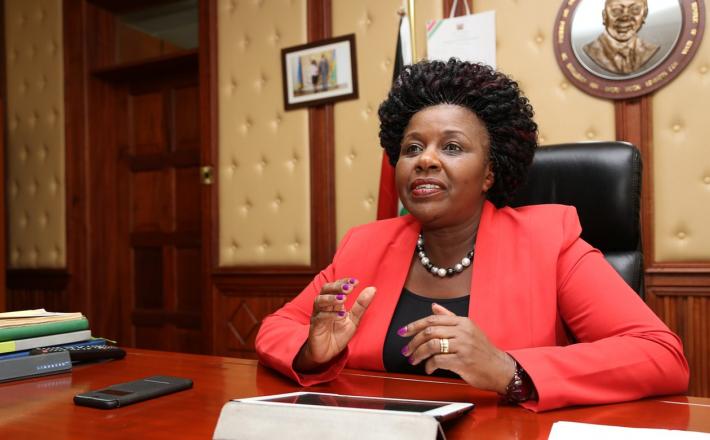 Given that she is deputy speaker in parliament, the holder of a PhD and has served as an assistant dean at one of Kenya’s leading universities, Joyce Laboso should be eminently qualified to run for any political office in Kenya.

However, the central issue in her campaign to become governor of Bomet, a county in the heart of the Rift Valley in western Kenya, has been her marriage.

Her husband’s ethnic group is different from the one that dominates Bomet, which means Laboso has had to fend off accusations of being an “outsider” with “divided loyalties” stemming from her husband’s heritage.

Laboso’s campaign in the run-up to elections in August highlights one of the many challenges women face when they venture into Kenya’s male-dominated politics.

Although considered one of Africa’s most progressive democracies, Kenya remains a laggard in addressing the gender gap in political representation.

Between 2007 and 2013, only 9.8% of MPs were women. Following the introduction of a revised constitution in 2010, 47 counties were created, each with its own female representative. That has pushed the number of women in parliament up to 19.5%.

However, Kenya still trails far behind other countries in the region, such as Rwanda, where 64% of seats in parliament are held by women.

Legislation to trigger a clause in the constitution limiting to two-thirds the number of seats held by one gender in any public institution has been repeatedly blocked by the male-dominated parliament.

Women in politics also complain about encountering sexism on the campaign trail. In November, a popular TV talkshow was dropped after a video of a male politician’s comments to a female candidate for Nairobi governor went viral and caused widespread outrage.

Lawyer Miguna Miguna, one of the candidates, called his rival Esther Passaris a “socialite bimbo” and said she was selling her looks, not her leadership abilities. “Everybody is raping Esther. Esther is so beautiful everybody wants to rape her,” said Miguna during a break in the show. He was filmed and the recording leaked online.

According to the 2014 Kenya Demographic and Health Survey, 45% of women aged 15 to 49 have experienced physical violence, and 14% have suffered sexual violence. The same survey showed high rates of acceptance of wife beating among both men and women.

Nairobi University lecturer Winnie Mitullah says women should not shy away from politics despite the challenges they face. “Cultural attitudes and hang-ups will always be there,” she says, arguing that candidates should instead be better prepared to take on men at the ballot box.

“The immediate priority should be how to train women to manoeuvre in the rough theatre of politics. We have to look at the pool of resources available to them, and that doesn’t just involve money. It includes things like security and technical advice to ensure that the playing field is levelled and that they can have an equal chance to sell their agenda based on merit and competence.”

Near-autonomous counties run by elected governors were introduced in the 2010 constitution to devolve power and resources to the grassroots. It was aimed at tempering competition for national office, which contributed to the violence that followed the disputed 2007 election.

With the winner in county polls gaining control of an annual budget running into billions of shillings and enjoying virtual autonomy in deciding local priorities, the position of governor has become one of the most hotly contested posts. All 47 governors elected in 2013 were men. But in next year’s election several women, including two former presidential candidates, Charity Ngilu and Martha Karua, have emerged to challenge this male dominance.

Many others, including Martha Wanjira, a nominated senator who is running for MP in a constituency in the Rift Valley, are contesting elective posts. But they face challenges familiar to those who came before.

“I don’t think there is a female politician in Kenya who has not been called a prostitute at one point or another,” says Wanjira.

She calls on the media to avoid coverage that objectifies women. “It’s already hard enough because you have to work twice as hard to be recognised half as much, and it’s very unfortunate when journalists who should know better allow people to put down women,” she says.

Nominated senator Beatrice Elachi, a candidate for MP in a Nairobi constituency, adds: “It is interesting that society believes you can be a doctor or pilot or anything else but when it comes to political power, that is when culture sets in. Politics is seen as the vehicle of ‘real power’, and when you run for election, that is when you see real resistance to the concept of women leaders.”

Mitullah says women should continue to press their case to the electorate, arguing that “cultural attitudes are not cast in stone” and that consistently challenging outdated assumptions is the best way forward.