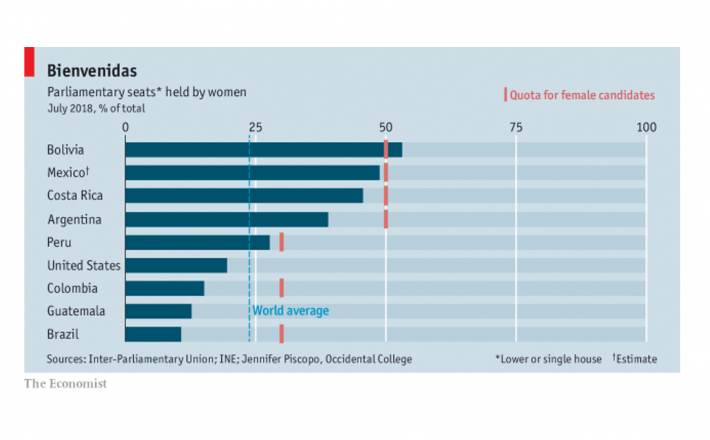 “When a woman enters politics, it changes her. When many women do, it is politics that changes.” So said Florentina Gómez Miranda, a former Argentine congresswoman. Despite its macho reputation, or perhaps because of it, Latin America is unusually keen on quotas for female political candidates. In 1991 Argentina became the world’s first country to require parties to nominate women in a minimum fraction of races. Today, of the 18 Spanish- or Portuguese-speaking countries in the Americas, 17 have a version of this policy. Elsewhere, around a third do. Five of the world’s nine most female lower houses are Latin American. One of them is in Mexico, which on July 1st elected a near-even split of the sexes in both chambers.

Many Latin countries got rid of dictatorships in the 1980s, creating a group of young democracies unbound by precedent. Yet just 5% of elected legislators that decade were female. Feminists, many of whom had campaigned for democracy, began painting political parties as sexist relics for failing to run female candidates. Argentina responded by imposing quotas on parties, and fellow Latin American states followed suit.

Click here to read the full article published by The Economist on 28 July 2018.