From Merkel to May and Beyond: Are Women Running the World?

From Merkel to May and Beyond: Are Women Running the World? 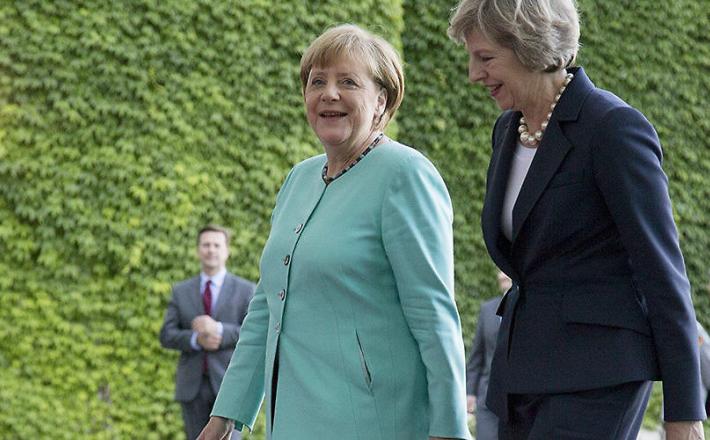 Meryl Kenny, Lecturer in Gender and Politics at the University of Edinburgh, wrote an article published by IPI Global Observatory, on the recent rise of women holding positions of political power worldwide. Due to its interest, we transcribe the text below. Please click here to read the original version.

"After a tumultuous few weeks in British politics, Theresa May became Britain’s second-ever female prime minister on July 11. By January next year, three of the world’s six largest economic powers—the United Kingdom, Germany, and the United States—may be run by women. The United Nations is also tipped to gain its first female secretary-general later this year and women currently chair the US Federal Reserve and head the International Monetary Fund.

In the UK House of Commons, it looked briefly like May might also eventually face a female opposition leader, though Angela Eagle withdrew from the Labour Party leadership contest. Meanwhile, women lead three of the largest parties in the Scottish Parliament, including First Minister Nicola Sturgeon. The First Minister of Northern Ireland, Arlene Foster, is also female.

Do these milestones signal, as many commentators have proclaimed, that women are now “taking over” the world? While there may be some more cracks in the “highest, hardest glass ceiling,” it hasn’t shattered yet. Globally, the gender gap in political leadership is stark: there are still only 16 women prime ministers and presidents around the world. Leaders like May, Germany’s Angela Merkel, and potentially Hillary Clinton in the US, therefore, remain the exception rather than the rule. In general, the more powerful the political position, the less likely it is to be filled by a woman. Looking at representation more broadly, women hold only 23% of legislative seats worldwide and have currently achieved equal representation in only two countries: Rwanda and Bolivia, both of which impose legal gender quotas for political office.

Out of political crisis, then, comes opportunity. As recent research by scholar Karen Beckwith highlights, periods of political and party upheaval often result in the removal of senior male party leaders (and their teams), thereby opening up more possibilities for women to run for the top job. Other male challengers may also decide not to throw their hats in the ring, waiting for a better opportunity to come further down the line.

In the case of the UK Conservative Party, David Cameron’s failure to keep Britain in the European Union led to his resignation, while also further damaging his once likely successor, former Chancellor George Osborne. Meanwhile, assumed frontrunner Boris Johnson’s leadership bid crashed before it had even started, after a last-minute betrayal from fellow campaigner for leaving the EU (and former Justice Secretary) Michael Gove. This left the field clear for both May and challenger Andrea Leadsom, who subsequently pulled out of the leadership race.

Yet, May may soon find that the top job is a poisoned chalice. Indeed, research suggests that women leaders often find themselves on the edge of a “glass cliff”: they are more likely to be elected to leadership posts when there is a high chance of failure. In May’s case, the cliff is particularly sheer: she faces a divided country, a divided party, and a deeply uncertain political and economic future. If she fails to “fix” these crises, research again suggests that her tenure may be short-lived. Women leaders are more likely than men to be thrown out—and thrown out more quickly—if their parties continue to flounder. This, in turn, may reinforce wider gender stereotypes about women’s qualifications and capabilities as leaders.

Why does it matter? The continuing under-representation of women in positions of power around the world sends powerful symbolic messages about who is fit to lead, and who is not. Having more women at the top may also have substantive effects. Some studies, for example, have found that having more women in leadership positions has positive impacts on overall numbers of women candidatesand parliamentarians. Others find that as the number of women in leadership roles rises, parties are more likely to include social justice issues in their party platforms. Meanwhile, studies of democratization, gender equality, and peace find that countries with low levels of women’s political representation have a much higher conflict risk than countries with more women in politics.

Will May’s premiership benefit UK women more generally? While she has made a number of high-profile female appointments—including Amber Rudd as Home Secretary, Liz Truss as Justice Secretary, and Justine Greening as Education Secretary—only eight of her 23 cabinet members are women, which is an increase of just one from David Cameron’s cabinet. Meanwhile, key “Brexit” roles in managing the UK exit from the European Union have gone to men, including David Davis, appointed as Secretary of State for Exiting the European Union, Liam Fox as International Trade Secretary, and, most surprisingly, Boris Johnson as Foreign Secretary. This again potentially reflects wider comparative trends: female leaders facing the glass cliff may feel vulnerable to male challengers, and may try to encourage loyalty by rewarding them with key government posts.

The true marker of progress will be when female leadership is seen as a normal and unremarkable feature of the political landscape, with women given the chance to take charge in the good times as well as the bad."