As midterms near, more women plunging into campaigns across the United States

As midterms near, more women plunging into campaigns across the United States 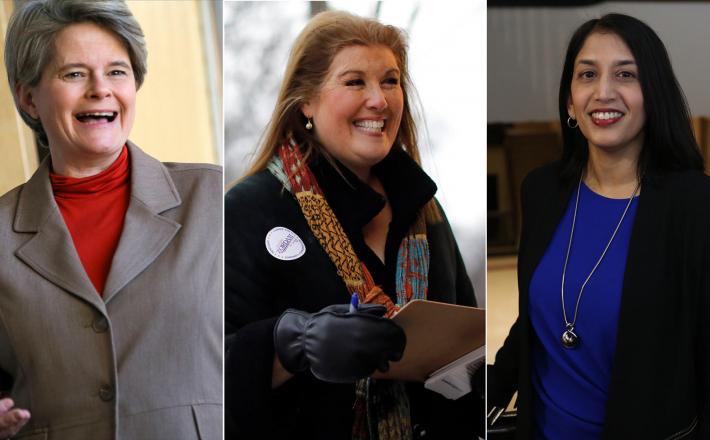 Nearly a year after her hopes for the first female president were dashed, Beth Vercolio-Osmund contemplated her own political debut.

Last fall, increasingly frustrated with lawmakers and the direction of politics in Washington, the 49-year-old Ottawa mother of three who runs a farm with her husband had been trying to expand her community involvement and make a difference locally. When it became clear to her that volunteerism was no longer enough, she considered a friend’s suggestion to run for Congress.

“I mulled it over for a while and had just about talked myself out of it,” Vercolio-Osmund said. She even told her husband he should be the one to run, but he pointed out it was “time for women.” After much thought, she said, “I decided. I’m going to try.”

Vercolio-Osmund is one of three women with no political experience running in the March 20 Democratic primary in Illinois’ 16th Congressional District. Her run is part of a national trend of more women vying for offices at all levels of government. A majority of these women are challenging incumbents, and many of them are first-time candidates.

“While I absolutely respect experience … I do think that in a broader sense, all the women stepping up and running have experiences similar to mine,” said Vercolio-Osmund, 49. “We know how to run our businesses, our families, our lives. We are finally realizing, there is no special sauce that makes it possible to run for office. It’s a willingness to try, a willingness to make things better.”

Click here to read the full article published by the Chicago Tribune on 9 February 2018.