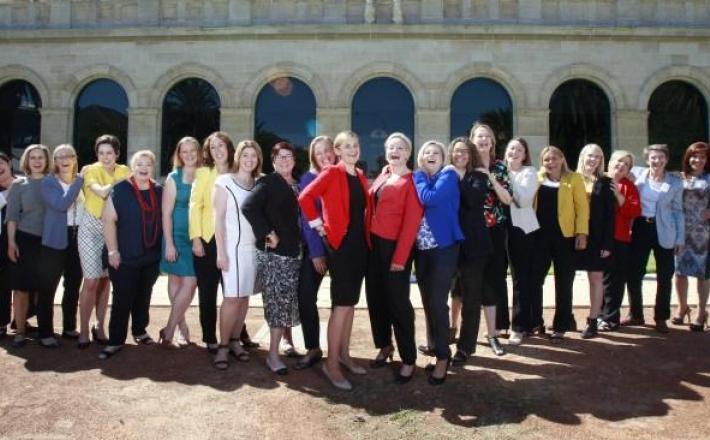 The “boys club” environment at Parliament House has been blown out of the water as the biggest contingent of female Labor Party politicians descend on the institution.

The new parliament is also set to boast the most women from all political persuasions to ever grace its musty halls, with counting to date indicating a tally of 30 women — beating the 2010 record of 29 women in both houses.

As one of seven new MLAs, Member for Bicton Lisa O’Malley, 48, said the “boys club image has been completely smashed”.

“There’s no room for some of the behaviour we’ve seen from male politicians in the past, we’ll put them into line,” Mrs O’Malley said.

The first woman to represent the seat of Murray-Wellington, Robyn Clarke, 52, said she had been told throughout her campaign: “It’s about time a woman stepped up in this electorate, we need someone to bring a little TLC.”

Self-described feminist Cassie Rowe, Belmont’s new MP, said she was looking forward to being a role model for her two daughters, aged 18 months and four years, and to be mentored by her sister, MLC Samantha Rowe.

But the path to power for women has not been so accessible in the past.

One of Labor’s MPs who paved the way for new female politicians is Member for Midland Michelle Roberts, 57, who today marks 23 years in parliament — the longest stint for any WA female politician.

“There’s been a really significant change over the years I’ve been here,” Mrs Roberts said. “I was told by a male Liberal minister in 1994 to ‘stick to your knitting’ but no one has made that kind of remark for a long time.”

Click here to read the full article published by Perth Now on 18 March 2017.