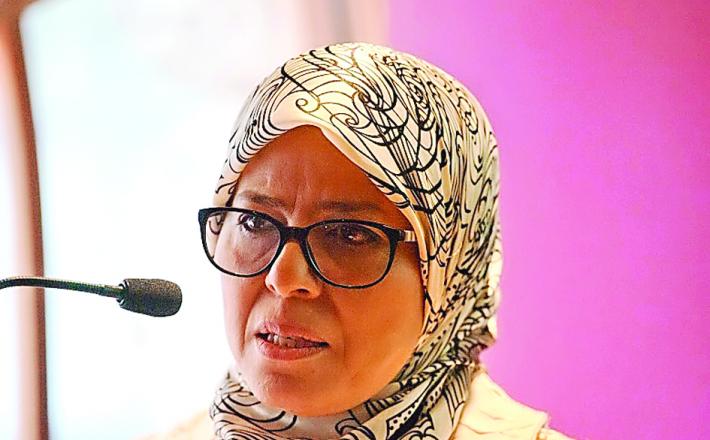 Mohammad Shoeb publishes in Qatar’s The Peninsula this article on women’s integration through quota systems.

Integration of women in all walks of life, including national assemblies and other law-making entities, through quotas is a must to achieving sustainable development of Arab economies, says a woman Arab leader, who was actively involved in drafting Tunisia’s new constitution.

“Societies cannot progress by keeping half of its population (women) away from mainstream socio-economic and political activities. So women must be integrated in all walks of life, including law making process, through quotas or male-female parity system,” Amel Azzouz (pictured), Tunisia’s former secretary of state in charge of international cooperation, told The Peninsula.

“Being a feminist, initially I used to believe in women’s competence to prove that we are fit for this. But with time and practice, I discovered that unless women are given a chance, they would never come to the surface because of the socio-cultural and historical accumulations, which can be remedied only through quotas,” said Azzouz. She was in Doha to participate in the recently concluded conference on ‘Enriching the Middle East’s Economic Future’.

Azzouz said women in general, not only in Muslim and Arab countries, but across the world, are facing real impediments as they are not given their due and equal importance. “We still think and believe that women are not made for big missions. And, unfortunately, women have absorbed these narratives.”

She said the initiatives related to empowering women should begin at legislation and culture, because a country may have a best set of laws in the world but at the level of practice “you may see happening nothing on the ground” because of cultural baggage and other impediments.

“There are cultures which have taught women that they are not fit for politics, business and other big tasks. And there are men who still look at women that way. So the legislation and media can play a very big role in overcoming these impediments,” she said.

“I was involved in drafting our new constitution. So I understand well what it means to have male-female parity in the electoral system. But it (the male-female parity) has really empowered women in Tunisia. Today, we have several women legislators in parliament and local law-making entities which never existed before.”

Azzouz said under the Tunisian gender-parity ‘revolution’, what women has achieved is more than quota in parliament. The new ruling guarantees Tunisian women a place in the new political landscape. Under new laws, political parties must present equal numbers of male and female candidates in elections.

According to latest World Bank figures, the proportion of seats held by women in the Tunisian Parliament touched 31 percent — higher than many advanced countries, such as the US (19 percent) and the UK (29 percent).

Women in Tunisia, which was the epicentre of the ‘Arab Springs’, feature relatively strongly in public life compared to those in some Muslim countries in the Middle East and North Africa. For example, the representation of women in the national assemblies of some countries, such as Kuwait, Oman, Yemen, Iran and Egypt is less than two percent.

In contrast, according to reports, women in Tunisia represent 26 percent of the working population, half of students, 29 percent of magistrates and 24 percent of the diplomatic corps. Click here to access the Peninsula.