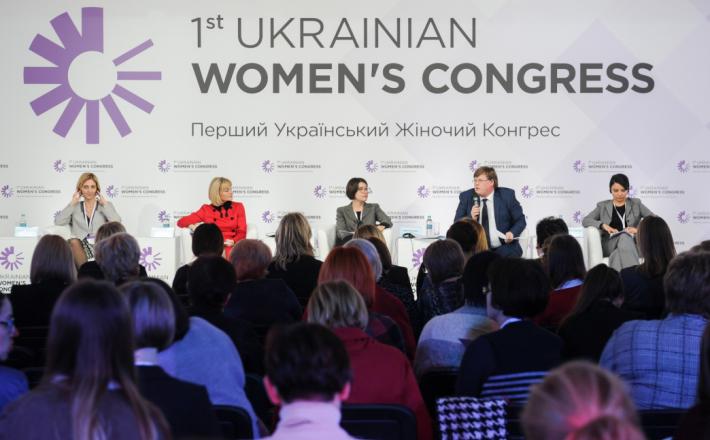 Women are building Ukraine’s future and playing prominent roles more than ever before in the nation’s democratic transition – particularly since the 2014 Revolution of Dignity (also known as Euromaidan). Public demand for new faces in government, and calls for sweeping political reform, have fueled both the increased election of women and the introduction of legislation to address gender inequities. And in 2017, the Cabinet of Ministers created a new position – Gender Equality Commissioner – to respond to the growing demand for government action on gender issues.

Despite this progress, women still need a dedicated platform to share their experiences and ideas, and to form a cross-cutting gender equality agenda. For that reason, the Ukrainian Parliamentary Equal Opportunities Caucus (EOC) organized the First Ukrainian Women’s Congress, which brought together more than 400 accomplished women and men representing the executive and legislative branches of government, civil society, business, academia and media. These gender equality advocates discussed the challenges to advancing women’s rights in Ukraine and the path for women’s advancement in the future. By the end of the Congress, the participants had developed a gender policy resolution to help lawmakers, businesspeople and civil society grow opportunities for women in the country.

Click here to read the full article published by NDI on 22 March 2018.