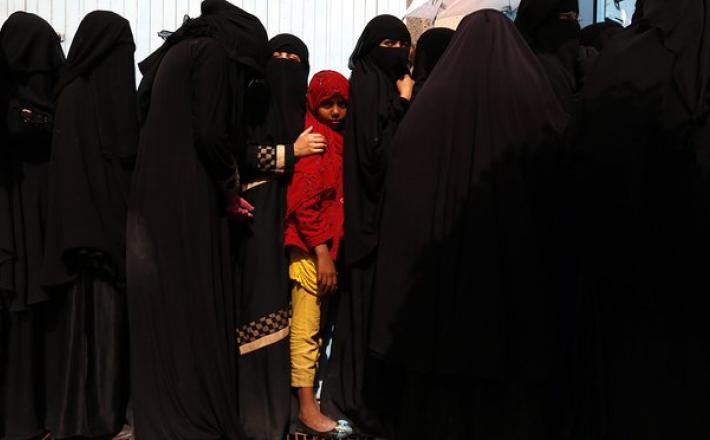 The Guardian has published an article on UN’s campaign to highlight the role of women in peace-building and conflict resolution– hoping that their largely unsung work in Iraq, Yemen, Syria, Libya and Palestine will inspire others.

A series of five films commissioned by UN Women is entitled in Arabic and English simply #WeAreHere, a statement of defiance and a message of future commitment.

“Every time I meet a woman I feel there is hope in Syria,” says Mona Ghanem, a Damascus lawyer who was forced to leave the country after the uprising against President Bashar al-Assad morphed into vicious armed conflict. “Women have such potential, such possibilities, but they need a ray of light to walk the right path.”

Palestinian women among the 17 interviewees describe the double burden of life under Israeli occupation and a male-dominated society that treats them as second class. “We trust Ahmed, not Maryam. We trust men, not girls,” complains Salha Mohamed from the West Bank town of Ramallah.

Asma al-Ghoul, living under what she describes as the suffocating siege of the Gaza Strip, says: “The most important thing for a woman is building up her self-confidence. That’s our problem, not only as Arab women but as women in general.”

In Iraq and Syria, Kurdish women face discrimination on both gender and national grounds. Girls are educated from childhood to be “slaves”, says Nazeera Gourie. Millions of Syrians are caught between the hammer of a repressive state and the anvil of the armed opposition, much of it Islamist and intolerant.

“In areas controlled by the extremists women are deprived of education, prevented from going out, stoned, flogged and killed on the slightest pretext, sold as slaves,” explains Majdoline Hassan of the Syrian Women’s Initiative for Peace and Democracy. “Among the displaced and refugees, women have become the breadwinners to support their families because the men are in prison, or fighting, or missing.”

Women in Yemen, the poorest country in the Arab world – and profoundly dangerous and under-developed even before the latest crisis pitting Houthi rebels against a Saudi-led coalition – make the same point.

Libyan interviewees are anonymous and have their faces blurred for security reasons: a woman from the eastern city of Derna, an Islamist stronghold, rails at exclusion from political life in the chaotic post-Gaddafi era. But there are more serious problems: her car was stolen by armed men, her colleague was killed and she was warned she would die too if she even left her home.

“Women are the first target of violent extremists to change societies, and they must be our first target as well, not only as beneficiaries of humanitarian assistance, but also as decision-makers who are capable of standing up to radicalism and ensuring inclusiveness and tolerance in post-conflict communities,” said Mohammad Naciri, UN Women’s regional director for Arab states.

The aim of the film series is to “inspire more women to share their stories of positive change, at a time when images of refugees in Europe dominate TV screens, and border security is a hotly debated topic”, the UN says.

It is more than 15 years since the UN security council unanimously passedresolution 1325, following decades of lobbying by women’s rights activists. It was the first resolution to address the specific impact of war on women and girls.

Yet women are still often most severely affected by conflict and humanitarian crises due to gender inequalities leaving them vulnerable to violence, exclusion, exploitation, inadequate healthcare services and a lack of education. And without adequate political and civil representation, they have no power to push change in their favour or respond to the problems that affect them the most.

Studies show that women have a highly influential role to play when it comes to standing up to violent extremism or pushing for reconciliation: negotiated peace agreements have a 25% to 50% likelihood of failing when women are not involved in political processes and peace talks.

UN Women says fewer than 3% of signatories to peace agreements are women, and less than 10% of negotiators are women. Of nine peace agreements signed in 2011, only two – Yemen and Somalia – made specific provisions for women. And only 2% of all international aid to fragile states focuses on gender equality as a primary target.

In one recent advance, the UN envoy for Syria, Staffan de Mistura, now has a women’s advisory board that meets when negotiations are held between bouts of diplomacy to shore up collapsing ceasefires at the Palais des Nations in Geneva.

The documentaries are supported by Finland’s foreign ministry.

“Peace does not grow without women,” says Tanya Gilly-Khailany, vice-president of Iraq’s Seed Foundation and a former member of the Baghdad parliament. “Women are the ones who push the most for peaceful resolutions as they are the ones with the greatest interest in achieving it, and as they lose the most in wars.”