When Women Lead the Revolution: In a remote corner of Syria, female fighters are taking the battle to ISIS and building a new society at the same time

When Women Lead the Revolution: In a remote corner of Syria, female fighters are taking the battle to ISIS and building a new society at the same time 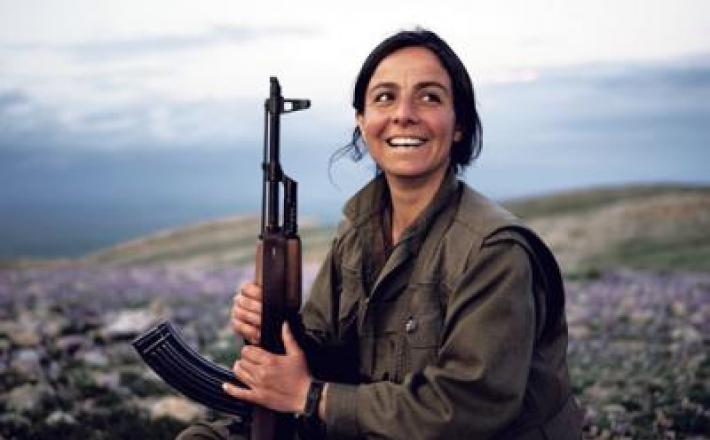 The Syrian civil war has produced a catalogue of horrors – cities bombed into rubble, the rise of ISIS, refugees fleeing across open seas on makeshift rafts– that have been widely covered in the Western media. During this same time, the dissolution of the Syrian state has opened the doors in one corner of the country for a social revolution that is at odds with the political norms not only of the rest of the Middle East but of the wider world beyond.

In the autonomous region of Rojava women are at the center of this revolution. They fight in all-women militias, staff local police forces and play leading roles in the decentralized system of governance that guides the daily affairs of much of this predominantly Kurdish region of three to four million people. Gender equity, assembly-based democracy and sharing of resources are central tenets of this revolution. If this sounds like something out of an anarchist manifesto, well, it kind of is. The writings of a Vermont-based eco-anarchist philosopher named Murray Bookchin who died a decade ago have been a major source of inspiration for Rojava’s revolution.

The Kurds are an ethnic minority in Syria just as they are in the neighboring countries of Turkey, Iraq and Iran. While the story of Rojava largely has gone unnoticed here in the United States, it caught the eye of feminist writer Meredith Tax. For the author of Woman and Her Mind: The Story of Everyday Life, a foundational text in the early U.S. women’s movement, the experiment underway in Rojava proved irresistible. Her latest book, A Road Unforseen: Women Fight The Islamic State, published by Bellevue Literary Press delves into the history of the Kurdish liberation movement and how it has evolved to put women’s empowerment at the center of all its work. She recently spoke with The Indypendent at her New York apartment. The interview has been edited for length and clarity.

Elia Gran: When did you first learn about Rojava and why did it catch your interest?

Meredith Tax: In August of 2014, I was watching the story develop of the Yazidis, a minority religious group based in northern Iraq that was trapped in the mountains by advancing ISIS forces. I had been studying ISIS and knew what was likely to happen.

The Yazidis were marooned and had no food or proper clothes. Was the US going to drop supplies? Would that mean the US would get into the war? Then I started seeing pictures of guerrillas who had come out of nowhere and gotten the Yazidis off the mountain into Syria. Many of the guerrillas were smiling young women in uniforms. I had to find out, Who are these people?

In all my years as a feminist on the Left, though I had seen many struggles that included women guerrillas, I'd never seen one with so many women so clearly in front.

I wanted people to know who the Syrian Kurds were and that they were different from the Iraqi Kurds who are close allies of the US. They had a different vision of what they   wanted to do. I started trying to learn about Rojava but I couldn't find anything, except in obscure anarchist publications. I spent the next year researching and ultimately writing A Road Unforeseen.

How did something so egalitarian take root in the middle of a war?

This is what a war does, it makes everything horrible, scary, kills people and destroys homes but occasionally it opens up a possibility for a group that didn't have anything before. Rojava's political and community institutions are comprised of at least 40% of both sexes and led by two co-chairs, one male and one female. The women there have had the opportunity, even on a small scale, to exercise leadership and power.

They have started by building from the ground up and at the same time have support from the top down. Here, women push from the bottom but often find a glass ceiling, even on the Left. I doubt that every man among the Kurds is equally open to women’s leadership but they had help from someone at the top helping them break the glass.  Abdullah Öcalan's, the imprisoned leader of the PKK (Kurdistan's Workers Party), has been very important in this process. It requires pressure from both top and bottom.

How would you compare the women’s movement in Rojava and what we see in the United States?

In Rojava, they do stuff. They are serious about theory, but they don’t separate theory and practice. Here it’s like a principle to separate theory and practice. Some of what they do is classic community organizing, like setting up an educational center and then recruiting women to come by and learn how to sew and make a little bit of extra money. But these routine activities are infused with socialist and feminist politics. Coming out of a very traditional rural society, feminists in Rojava have to have consistency and a long-term understanding that it's essential to have women out there, because they are half the people, and if you make a revolution with only half the people, it might end up benefiting only half.

The militia members are subject to some very stringent rules.

For the men and women in the militias, there is a rule of absolute celibacy. This way, the thinking goes, they won’t be distracted from achieving their objective of liberty and of becoming fully-developed human beings who have left behind all traces of feudal and tribal personality.

It is also based on the idea that men and women aren't ready, they haven't been equal long enough to have a good relationship yet. This is linked to the idea that women have to show that they are strong, brave and can make their own decisions on the battlefield. That they can fight as well as men because they are fighting to protect themselves and other women from ISIS slavery. By doing this, women exercise their autonomy and learn how to have leadership, stop being scared and stop imitating men.

Women in Rojava are saying that we have to be just as tough as men, defend ourselves and only then can we create the space to make a different society. It's saying self-defense is not only about the gun, it's also ideological. You have to know you're as good as the guys and you have to know what you stand for.

How has the U.S. government responded to the situation in Rojava?

The US didn't start supporting the Rojavan community until months after ISIS launched an all-out assault on the city of Kobane in 2014, two years into the war. One of the big problems in the region and in Washington, is that the default position is often ethnic partition rather than trying to find ways to make it possible for Kurds, Arabs, Christians, and all the other ethnic and religious groups in Syria, to collaborate under principles of democratic autonomy that will work for everybody.

Now the Syrian Kurds aren't getting the humanitarian aid they need. Rojava is taking refugees from all parts of Syria. Due to the embargo on both the Turkish and Iraqi sides of their border, they can't get supplies, food, seeds, clothes or medical equipment. People are at risk of preventable epidemic diseases and of bleeding out in the battlefield. They need humanitarian and economic aid — and political support to be part of negotiations — as well as military, and the US has not dealt with that.

What you see as the future of the social revolution taking place in Rojava?

In Rojava the Kurdish Workers Party (PKK) have persuaded most of the Kurds to adopt gender equality but are they going to be able to do this with other ethnic groups and traditional tribal leaders? And if not, what then? They are committed both to local autonomy and to female equality and these two may conflict.

Many Kurds are secular. The common base is the faith that they can remake society by becoming new men and free women. It's very idealist. They expect people to live in a very rigorous way and not everyone will want to do it. Click here to access the source of the story.