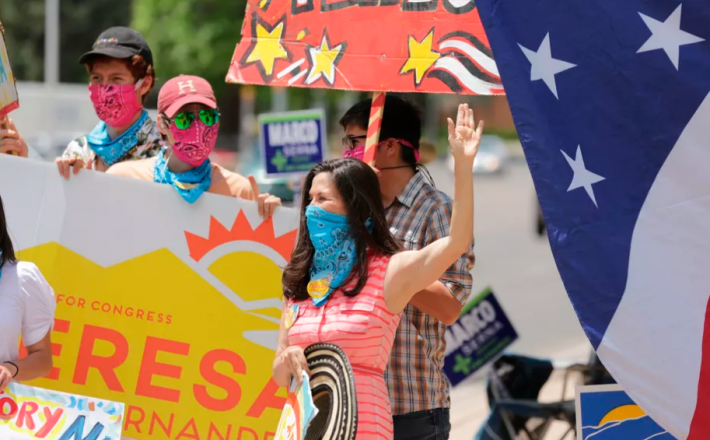 The June 2 primaries were a major night for women candidates, so much so that in multiple House races in New Mexico, Indiana, and Iowa, voters will choose between two women candidates this fall.

Take New Mexico, where, according to primary results from Decision Desk, all the general election candidates for the state’s three House districts — on both sides of the aisle — are poised to be women.

On the Democratic side, Reps. Deb Haaland and Xochitl Torres Small will be defending their seats in the first and second congressional districts, where former chief of staff to the Attorney General Michelle Holmes and former state Rep. Yvette Herrell will be challenging them. In the Third District, where the seat is currently open, Democrat and legal advocate Teresa Leger Fernandez could go up against Republican and engineer Alexis Johnson, though the race is still too close to call.

The candidates in Iowa’s Senate race, as well as two of the four House races, are all women, too. Real estate developer Theresa Greenfield is challenging Sen. Joni Ernst (R-IA) in one of the most closely-watched Senate contests this fall. And incumbent US Rep. Abby Finkenauer will face off against current state Rep. Ashley Hinson, while former Democratic state Sen. Rita Hart and Republican state Sen. Mariannette Miller-Meeks will duke it out for an open seat in the Second District. Rep. Cindy Axne will also be defending her seat in Iowa’s Third District against former Rep. David Young.

Click here to read the full article published by VOX on 6 June 2020.