A Year in Crisis for Yemen’s Women

A Year in Crisis for Yemen’s Women 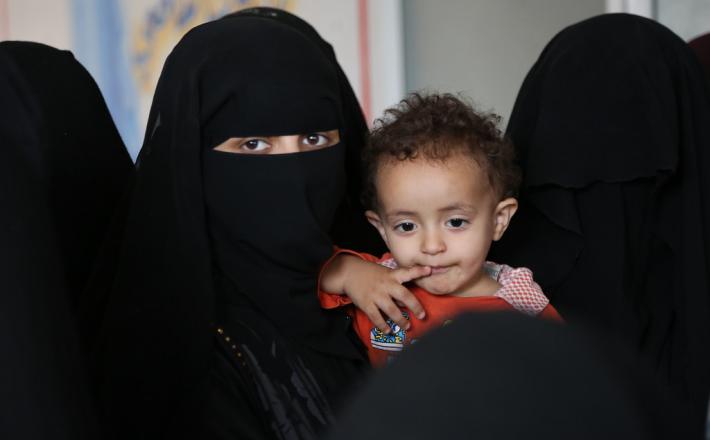 According to UNFPA, there are 21.2 million people in need in Yemen, 3.4 million of them women and girls of reproductive age. Women & Girls Hub published this article by UNFPA Yemen. Click here to access the full news story.

During times of conflict, access to reproductive healthcare can mean the difference between life and death for a woman. With medical equipment and social support, UNFPA Yemen helps women and children stay safe amid the country’s civil war.

The fighting that began in Sana’a, Yemen, in March 2015 quickly escalated into a civil war and national humanitarian crisis. Today, the conflict affects 21 of Yemen’s 22 governorates. The scale and scope of humanitarian needs remains staggering, with 21.2 million people requiring some form of humanitarian assistance to meet their basic needs or protect their fundamental rights. This is equal to nearly 80 percent of the population.

One small but powerful tool the organization uses to help women caught in the conflict is the dignity kit. Filled with personal hygiene items – such as sanitary towels, toothbrushes and laundry detergent – and culturally appropriate clothing, the kits not only allow women to maintain their personal hygiene, particularly menstrual hygiene, but also give them more freedom to move around and reduce their vulnerability to gender-based violence when they seek humanitarian aid. So far, UNFPA has handed out 100,000 dignity kits to the country’s most vulnerable women and girls.

“When I received my dignity kit, I just cried and I made the distribution team cry too,” said a woman who had recently fled an enclaved area in Taizz with her two children. “I am just so happy. I don’t have clothes or anything to keep myself clean; this is so helpful to me.”

The ongoing conflict has caused a breakdown of health services, with severe shortages of qualified medical personnel and life-saving reproductive health supplies. The result is an estimated 14.1 million people in need of health assistance. To enable women and girls in the most remote conflict-affected areas to access reproductive health services, UNFPA operates mobile clinics and teams – 31 in total – each consisting of a doctor, a midwife and a lab technician. They provide antenatal and postnatal care, family-planning services and assistance for safe deliveries.

“I lost my husband four months ago because of the war,” said a 45-year-old woman with six children who was visiting a UNFPA-supported mobile clinic in Taizz. “I came here to find medication for my bleeding. I need to live, not for myself, but for my fatherless children.”

“As we live in wartime, there is a huge shortage in equipment,” said Dr. Ahmed Yahya al-Khazan, the director of Al-Mahabisha hospital in Hajjah governorate. “The assistance just came in time.”

Nafessa was the first baby to be placed in one of the hospital’s new incubators. “She was in a dire need of the incubator,” said al-Khazan. “She was about to face the same fate as other babies who have died because of the lack of an incubator.”

Nafessa’s father, Na’ef Ahmed, was terrified that he might lose her. He and his wife had been waiting for five years to have a child. The new equipment came as a surprise – and a relief. “My wife was taken to the hospital after two days spent suffering in labor at home,” he said. “When she arrived, she underwent a Cesarean section. I did not know that the hospital now has an incubator.”

When a crisis strikes, it affects men and women differently. In Yemen, the status of women and girls was already low, prior to the conflict: Ninety-two percent of women reported that violence against women commonly occurred in the home. Today, they are even more vulnerable, exposed to violence, abuse and exploitation.

Over the past year, UNFPA has provided more than 6,000 survivors of gender-based violence with services including psychosocial support, legal aid, access to safe houses and referral to health and other services. To address the cause as well as the effect, the organization has conducted some 200 awareness-raising sessions for men and boys on preventing gender-based violence.

“My life has been transformed from a life of poverty, begging and beatings to a life where my kids could go to school, and my husband and I have jobs and look after our children together,” said Selam, 35. “I could not dream of more.” Selam, who comes from Shabwah governorate, was begging on the streets with her four kids before the police referred her to a UNFPA-supported women’s space. She now has a job and her children are enrolled in school.

As the conflict in Yemen enters its second year, addressing the reproductive health of the country’s women and children, and protecting them from gender-based violence, remains a crucial part of international aid efforts.