Youth in Kyrgyzstan unite their voices ahead of crucial presidential vote

Youth in Kyrgyzstan unite their voices ahead of crucial presidential vote 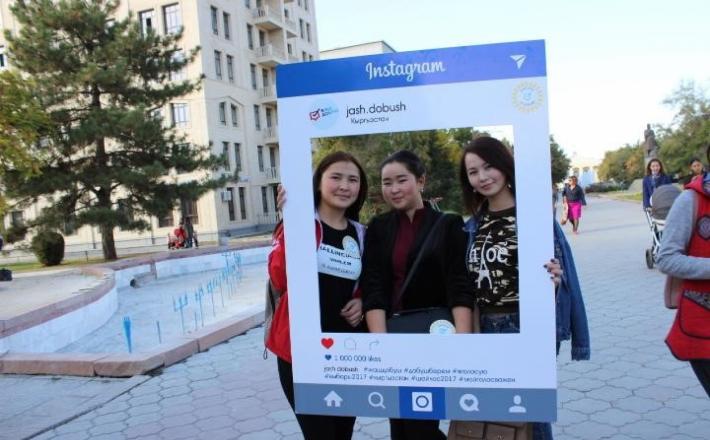 In 2017, Kyrgyzstan faced a critical turning point in the country's history. For the first time, an elected president would willingly hand power to an elected successor. Recognizing the importance of this vote, a group of 15 young activists from across the country worked together to carry out a youth-led Get Out The Vote (GOTV) campaign. The activists spoke with thousands of their peers, from all regions of the country, and creatively used social media to spread the message that young voices should be a critical component of this unprecedented election.

The 2017 GOTV campaign built upon the work of similar young activists in Kyrgyzstan who led initiatives ahead of the 2015 parliamentary and 2016 local elections. In 2015, NDI launched the Jash Dobush (“The Young Vote”) GOTV project, partnering with 16 youth activist leaders who met with their peers to talk about the importance of voting. The young people took advantage of growing social media use among their peers to broaden their reach, designing videos, webpages and even organizing a Selfiekattoo, or selfie voter-registration challenge. For the 2016 city council elections in Kyrgyzstan’s capital, Bishkek, returning youth activists expanded on the progress made in 2015. In an effort to motivate greater engagement, activists involved local celebrities in GOTV videos, which were posted on popular social media platforms like Facebook and Instagram.

Click here to read the full article published by NDI on 06 February 2018.