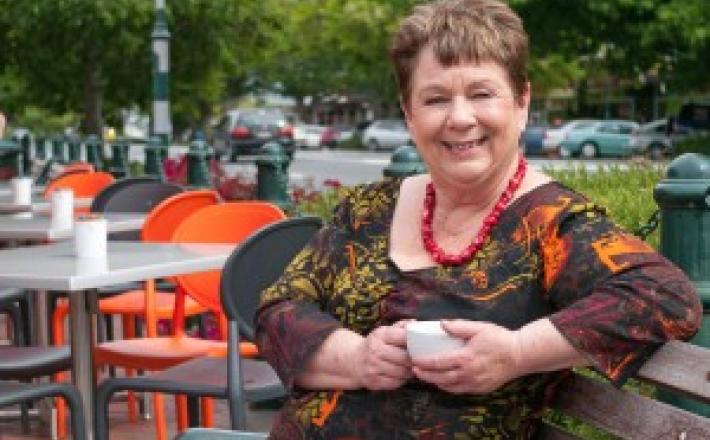 Frances Denz has a long history of working with disadvantaged people.  In 2013 she was made a Member of the New Zealand Order of Merit by Queen Elizabeth for services to business, and in the same year was awarded the prestigious Tertiary Teaching Excellence Award by the Minister of Tertiary Education.

In 1972 my world fell apart.  My husband left me, I had cancer, was unable to work and the Government had taken our land for military purposes.  In law, women were still chattels, owned by their husband and there was no benefit for married women.  I was destitute on the streets of Wellington – our Capital City.  I was too ashamed to tell my family my husband had left me for another woman.  Strangers took me in, and gave me shelter and a little food while I had radiation treatment for the cancer. As I recovered I decided to stop being a victim.  I walked the five miles to Parliament, and made my way to the Prime Minister’s office (you could in those days) to demand help.  The Prime Minister gave me food, listened to my story and rang the Department of Labour and told them to give me a benefit.  I became the first married woman in New Zealand to receive State support.  But more importantly it taught me that going straight to the top was a very quick way to solve a problem.

As I remade my life by starting businesses I decided to get involved in politics. I went to my first branch meeting to find a room full of men. They asked what I wanted, and when I stammered that I wanted to join the party, they directed me to the kitchen with instructions to make their tea.  I walked out the back door.  Ten years later I tried again.  Things had changed. Helen Clark (later Prime Minister, now head of UNDP) was part of a group developing strategy for women in the Party, which gave me courage. The Branch, still all men, had been instructed by Party officials to appoint a woman officer bearer.  As I was the only woman there, I got the job.  The Party requested woman centered remits for the Women’s Conference and again, because I was there I was asked to do it.  I prepared five remits, presented them to conference and within six months of the party winning, those remits became law.  I rose through the party hierarchy, finally being elected to the Women’s Council.  This was at a time of huge economic and social change.  I was working with the women in my community as the recession hit, and they needed to get work.  I organized food parcels, women’s refuge and rape crisis networks and trained older women in how to run their own businesses.  This upset the men, and the rumour started that as I was a “feminist”, I was therefore a witch.  I lived on my own in the countryside, and my windows were smashed, and I received hate mail.  The police would not help.  Finally in fear, I returned to Wellington. But I learnt this year, from a Minister of the Crown at the time that my work with women was noted and formed the basis of major policy changes in the education system.

I started work in the Parliamentary Research Unit (unpaid) and learnt how power really worked.  These lessons have proven invaluable. Later I started teaching long term unemployed people how to start businesses and finally specialized in working with disabled people helping them set up small businesses. In these years 4000 of my clients became successful business people.  I established two loan funds, one for women who were unable to get the capital they required for business start-ups, which is still in existence after 21 years, and the other for people with disabilities for the same purpose, which is still functioning after 15 years. Both these were designed to be managed by local communities with support from the parent body.

I became aware that my Party of choice was actually creating dependency, not setting people free. With sadness, I joined another Party that recognized the issues, and was soon elected to their Board.  Unexpectedly, I also made a big contribution to the Defence Policies just by being in the right place at the right time.

I am now a professional director. My company, Stellaris, Ltd., specialises in training company directors.  I was tired of being the ambulance at the bottom of the cliff, and believe that we need to stop people falling off in the first place by having excellent businesses and organisations at the top of the cliff.

During my life time, women have gone from being owned by men with no freedom, to being able to be at the top of the business and political world.  We just have to take the first steps, and then keep going. I also believe that we don’t have to be Members of Parliament to make changes.  Being actively involved behind the scenes can be as powerful, if not more so than being in front.  It depends what drives you and your skill base.