Working for Equality in Bhutan

Working for Equality in Bhutan 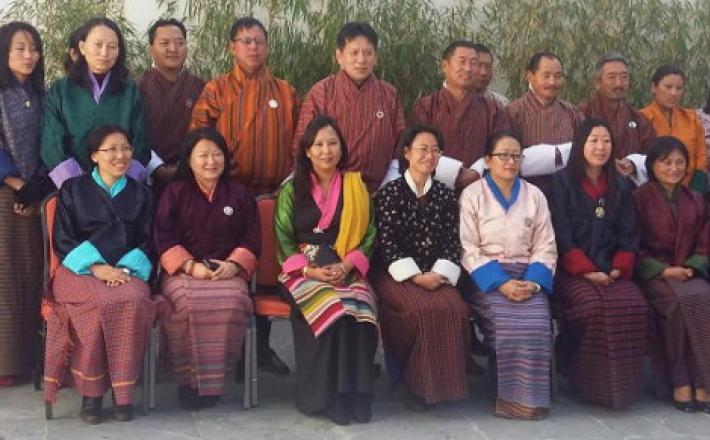 This Workshop Report was originally published by International IDEA here on January 11, 2016.

Women continue to be underrepresented in Bhutan politics and following the general elections in 2013 the number of women parliamentarians sank from 14 per cent to 8 per cent. No women were elected for a second term. Women continue to face a multitude of obstacles in Bhutan politics including a lack of gender sensitive laws and practices, prevailing gender norms and stereotypes combined with low levels of education disproportionately affect women. Women are even more disenfranchised in local politics than on national level.

In this context the Election Commission of Bhutan (ECB) with support from International IDEA organized the country’s first Electoral Forum on Women in Politics in December last year. The forum also followed up on a research project titled Study of the Determinants of Voter’s Choice and Women’s Participation in Elective Offices in the Kingdom of Bhutan, which was initiated by the ECB in 2014.

The study found that education and experience play a key factor in increasing the number of women in politics and proposes measures to improve the current situation. The measures include concerted education and voter education efforts to challenge gender stereotypes and to inform people of the importance of including women in political decision-making. The study also suggests looking over election campaign on a continuous basis and putting in place gender equality measures throughout the electoral process.

In his key note address, the Chief Election Commissioner Chogyal Dago Rigdzin, called it a paradox that despite women making up 51 per cent of the electorate, women politicians face more obstacles than their male colleagues. “Encouraging, educating and instilling confidence in women to run for office is key for Bhutan’s democratic process and progress,” he said.

But according to Rigdzin, the CEC was also optimistic about the future aspects and acknowledged several key players who have been working towards advancing equality such as Bhutan Network for Empowering Women BENEW and Non-Formal Education (NFE) centres. These centres were initiated by the government to provide education to those who did not have opportunity to attend schools or who did not complete school. “A small change in the political parties’ polices and structure would really increase the number of women in politics,” Rigdzin said.

The first step would be to create a more enabling environment for women to participate in politics citing an example of the Functional Literacy Test which can be held at village and gewog level. Gewok level is specific to Bhutan and is the administrative level after district level.

The 18 December forum was attended by representatives from Bhutan’s main political parties — the ruling Peoples’ Democratic Party (PDP), the opposition Druk Phuensum Tshogpa (DPT), the Druk Nyamrup Tshogpa and Druk Chirwang Tshogpa as well as representatives from smaller parties. Also present were Executive Director of Bhutan’s National Commission for Women and Children (NCWC), Kunzang Lhamu, and Head of Bhutan Network for Empowering Women (BNEW) Phuntshok Chhoden Tshering. A group of representatives from the print and broadcast media also participated actively in the discussions and deliberations. The total number of participants was 33, 22 women and 14 were men. Representing International IDEA at the forum Rumbidzai Kandawasvika Nhundu, Senior Programme Manager, said that politics in Bhutan is in a formative stage and has the opportunity to be shaped into an exemplary mechanism of consensus building, and collective and inclusive decision making.

“It is one thing to participate and one thing to have a voice,” she said, stressing the need for meaningful participation and further reinforced that men in general and male politicians in particular need to be included in the process. This would mean going “beyond the numbers”, giving women real political power. While political parties are struggling with broader structural and ideological challenges there is also a need for them to institutionalize gender equality measures internally early on to ensure women’s representation. Lhamu shared the draft National Plan of Action for Promotion of Gender Equality in Elected Offices, a positive new development in the debate of women in politics which has been put to the cabinet for approval.

The proposal ensures that nomination of “of at least 33 per cent female candidates by each political party for both primary and general elections”, and stipulates a mechanism to be instituted to fulfil the 33 per cent criteria. She also recommended that the electoral system and processes to be reviewed in order to enhance women’s participation, at the same time to meet the supply side, several support mechanisms including mentoring, grooming, improving female education and graduation rates, promoting a gender sensitive and supportive media in portraying female leaders positively and adopting appropriate affirmative action to enhance women’s participation in politics were cited as some of the measures.

Lucky Sherpa, former MP from Nepal and one of the presenters at the forum shared experiences from Nepal’s own challenges form women’s participation including poor literacy, combined with poverty, gender and caste discrimination, political conflict and religious fundamentalism. In Nepal violence against women as well as the perception that women are weak and a suspicion of women who chose to work outside the home propose massive challenges for women’s participation in politics.

During the forum three key interventions were identified as a way forward and were assigned to responsible agencies: