The cost of doing politics? Analyzing violence and harassment against female politicians

The cost of doing politics? Analyzing violence and harassment against female politicians 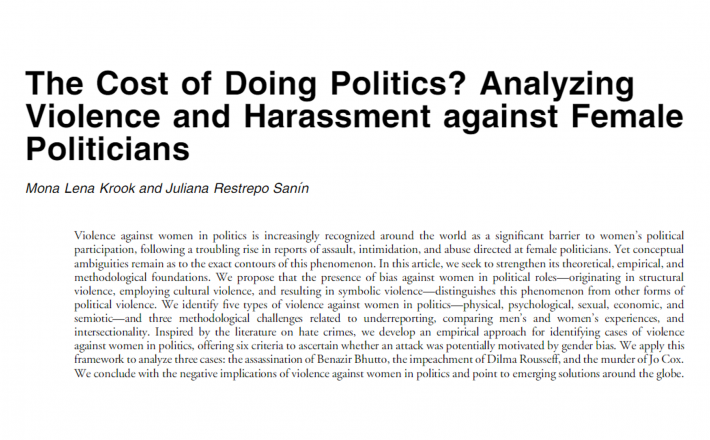 Violence against women in politics is increasingly recognized around the world as a significant barrier to women’s political participation, following a troubling rise in reports of assault, intimidation, and abuse directed at female politicians. Yet conceptual ambiguities remain as to the exact contours of this phenomenon. In this article, they seek to strengthen its theoretical, empirical, and methodological foundations. The article proposes that the presence of bias against women in political roles—originating in structural violence, employing cultural violence, and resulting in symbolic violence—distinguishes this phenomenon from other forms of political violence. The authors, Mona Lena Krook and Juliana Restrepo Sanín identify five types of violence against women in politics—physical, psychological, sexual, economic, and semiotic—and three methodological challenges related to underreporting, comparing men’s and women’s experiences, and intersectionality. Inspired by the literature on hate crimes, we develop an empirical approach for identifying cases of violence against women in politics, offering six criteria to ascertain whether an attack was potentially motivated by gender bias. They apply this framework to analyze three cases: the assassination of Benazir Bhutto, the impeachment of Dilma Rousseff, and the murder of Jo Cox. They conclude with the negative implications of violence against women in politics and point to emerging solutions around the globe.