Inclusion and Participation as Foundations of Democracy

Inclusion and Participation as Foundations of Democracy 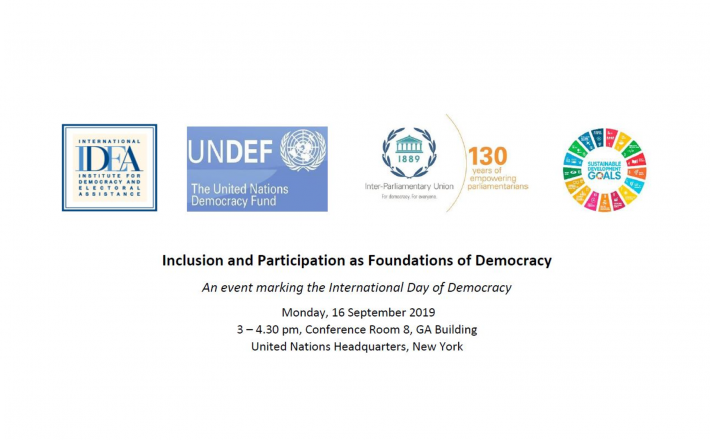 A great deal has happened on the international scene and in countries around the world since the UN first observed the International Day of Democracy on 15 September 2008. While people everywhere continue to aspire to democracy as a fundamental value of political and economic life, supported by representative, transparent and accountable institutions, the actual practice of democracy – in government and in society at large – is a cause of frustration and even resentment.

Leave no one behind is at risk of becoming an empty slogan.

This event will look closely at inclusion and participation as preconditions to democracy that have yet to be fully realized.

Panel presentations will illustrate how the under-representation of many groups in politics undermines the common good and with that, the whole architecture of democracy.  The discussion will look at how decision-making processes that do not include the participation of all people and communities, including the economically insecure, contribute to growing income and wealth inequality, disempowering people and fueling resentment against the institutions of democracy. The role of women and youth in reforming democratic practices will be highlighted.

The panel will also address the importance of analyzing data on participation and inclusion as a tool for monitoring progress on the implementation of the 2030 Agenda for Sustainable Development, which will be reviewed by the High-Level Political Forum under the aegis of the UN General Assembly.