African perspectives on gender equality and political empowerment of women

African perspectives on gender equality and political empowerment of women 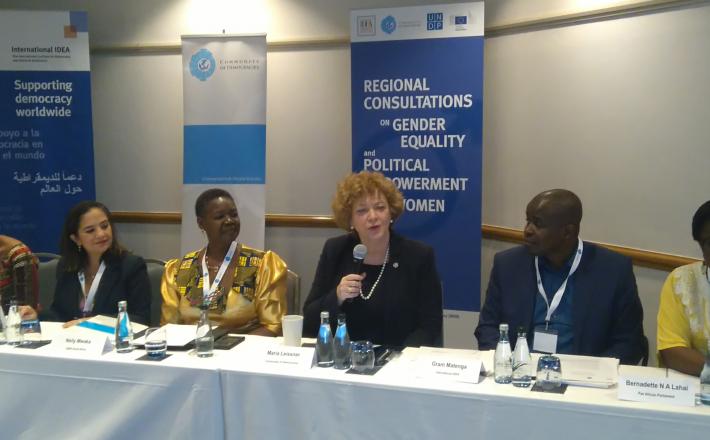 Education, increased awareness on the need to have women running for political leadership positions, overcoming traditional challenges based on stereotypes and understanding the difference between having quotas and having substantive participation of women are some of the main challenges and opportunities that men and women are identifying for the advancement of gender equality and political empowerment in Africa.

These issues, together with the lack of male full support to women and the reduced financial resources allocated to provide women with the tools needed to move forward, are the basis for the discussions that is taking place among the participants of the African Consultation on Gender Equality and Political Empowerment of Women.

The African Consultation took place in Johannesburg, South Africa, on 9-10 March 2017, as part of a joint initiative between International IDEA, the Community of Democracies and United Nation Development Programme (UNDP), aimed at analyzing the main policy and legal instruments that are in place at the global and regional levels to advance gender equality and promote the political empowerment of women. The Consultation also has the purpose of identifying the main successes, challenges and opportunities at the regional level for the advancement of goals; 5 (Gender Equality), 10 (Inequalities) and 16 (Peace, Justice and Strong Institutions) in support of the 2030 Agenda for Sustainable Development.

Participants highlighted the relevance of having a renewed strong global commitment to advance gender equality and to reduce all inequalities worldwide with the Sustainable Development Goals, supported and enabled in Africa by a strong array of legal and policy instruments that, when adopted by the national governments and accompanied by key stakeholders, result in instrumental opportunities for women advancement. These instruments include, but are not limited to, the following:

The African Consultation counts with the participation of representatives of government officials from Liberia, Sierra Leone and Uganda. International IDEA, the UNDP and the Community of Democracies where represented by Ambassador Maria Leissner, Secretary General of the Community of Democracies;  Gram Matenga, Senior Programme Officer at International IDEA/Africa Programme, and Nelly Mwaka, Gender Manager at UNDP South Africa. The Commonwealth Secretariat was also present at the Consultation.

The programme of the consultations intends to emphasize the needs of each region and allow the participation of relevant actors. Consultations have already being conducted in Asia, Europe and South-East, and two additional consultations will take place with a focus on the Middle East\North Africa region and the Americas. The results of the regional consultations will be captured in reports summarizing the final recommendations. The key components of the regional reports will be integrated into an Inter-Regional Policy Guidebook on Gender and Political Participation of Women.