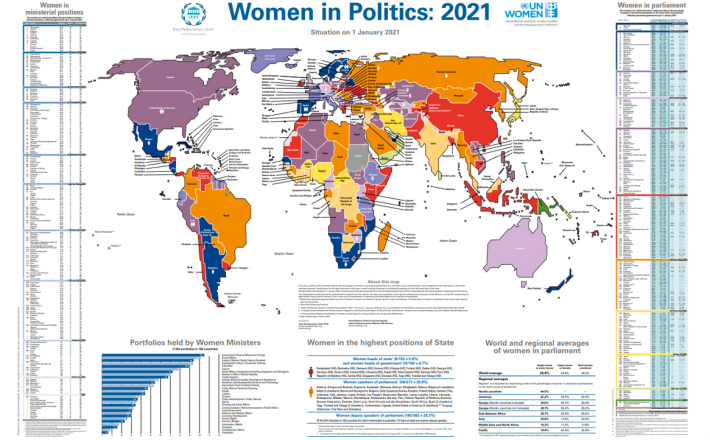 Despite increases in the number of women at the highest levels of political power, widespread gender inequalities persist, according to the 2021 edition of the IPU-UN Women Map of Women in Politics.

The IPU-UN Women Map presents new data for women in government and parliamentary positions as of 1 January 2021. The data shows all-time highs for the number of countries with women Heads of State and/or Heads of Government, as well as for the global share of women Ministers.

However, after last year’s map showed a spike at 21.3 per cent of women ministers, progression has slowed – with just a small increase to 21.9 per cent as of 1 January 2021. The data also reveals that the number of countries with no women in government has increased, bucking a downward trend seen the last few years.

There were also sluggish gains in the global growth of women parliamentarians in 2020, as shown in the IPU’s annual report on Women in Parliament, launched last week. As of 1 January 2021, the global share of women in national parliaments is 25.5 per cent, a slight increase from 24.9 per cent the year before.

Click here to read the full article published by the Inter-parliamentary Union on 10 March 2021.