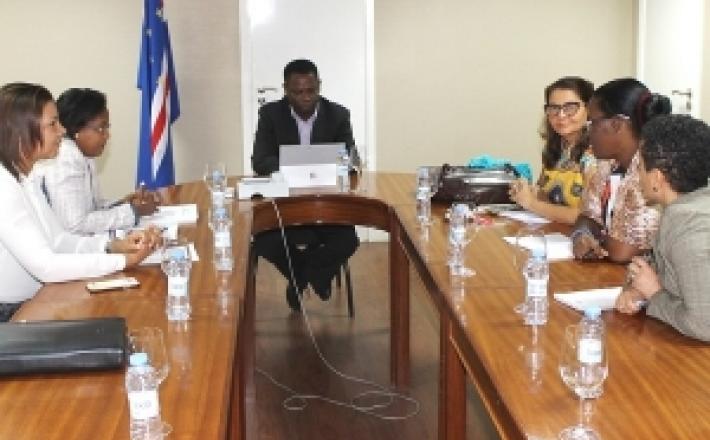 The Network of Women Parliamentarians in Cabo Verde (Rede de Mulheres Parlamentares de Cabo Verde, RMPCV) has met the Minister of Finance, Dr. Olavo Correia, and the Minister of Education, Family and Social Inclusion, Maritza Rosabal to deliver proposals and recommendations agreed upon after gender responsive budgeting trainings and meetings focusing on advancing gender equality in the country , facilitated by the PRO PALOP-L ISC project *.

In January, leaders and representatives of the RMPVC, the Cape Verdean Institute for Gender Equality and Equity (ICIEG), and civil society organisations met for a training to strengthen the participants’ knowledge and skills on gender parity mechanisms, which was organised with the support of UN Women. The training aimed at promoting the participation of women in policymaking and drafting an action plan for the creation and implementation of a gender parity law. By signing the Rui Vaz declaration, participants unanimously agreed that in order to speed up the progress on gender equality, particularly of female empowerment in politics, it is imperative to advance the elaboration and approval of this law by January 2019. It was decided that the gender parity law must ensure 50% representation of women in leadership and decision making.

Letter of Mindelo:  budget oversight with a focus on gender

The Letter of Mindelo was signed during a training on budget oversight with a focus on gender for parliamentarians, which took place on March 15th-17th, organised by the Network of Women Parliamentarians. The training for members of the network of Women Parliamentarians and the National Assembly, and Public Administration leaders sought to strengthen the analytical skills for incorporating gender indicators in the annual budget. A gender-responsive budget, that is, one which includes such indicators, is a way of guaranteeing the equal access to opportunities and benefits for men and women since it allows for the specific needs of women to be reflected in the process of reviewing and oversight of public expenditure.

The training led to conclude that currently the existing financial management instruments in Cabo Verde do not have the necessary focus on gender. Having in mind that the full participation of women and their empowerment is indispensable to the fulfilment of the commitments of the Agenda 2030 and the Sustainable Development Goals, the participating Members of Parliament of Cabo Verde have made the following commitments:

1.Elaborate a Strategic Plan on Sustainable Development considering the commitments made on the Government Programme on gender equality;

2.Incorporate and identify priority elements on gender equality to be included within financial management instruments;

3.Include the gender perspective in the elaboration of logical frameworks of projects and programmes, also integrating indicators and budget funds in an effective, sustainable way;

4.Further involve Specialized Committees and the Network of Women Parliamentarians in the negotiation process to allocate gender equality funds;

5.Engage parliamentarians, civil society, the executive and other partners in this initiative.

The participants in this meeting look at the ways to improve the preliminary draft of the new budget framework law and made several suggestions on how to incorporate the gender perspective. These included the introduction of indicators to identify the expenditure which would promote gender equality, and the allocation of funds specifically focusing on this matter.

The Minister of Finance thanked the group for the delivery of the documents (the Rui Vaz declaration, the Letter of Mindelo and the Preliminary draft of the new budget framework law ), as he is engaged in promoting gender equality and recognises its importance for the country’s sustainable development. In addition, he committed to study the documents and set a meeting with his Ministry aides, the Network of Women Parliamentarians and ICIEG to jointly analyse them.

The same documents were delivered to the Minister of Family and Social Inclusion with the purpose of obtaining her support in the inclusion of gender indicators in the Strategic Plan of Sustainable Development, which is currently being elaborated by the government. The Minister welcomed the proposals included in the documents, as the mission of her Ministry is to promote gender equality across sectors. The Minister invited the Network of Women Parliamentarians to collaborate on the training of staff from different line ministries on gender-responsive budgeting. The Network reiterated its support for the strengthening of the staff in line ministries skills on gender equality initiatives, and especially those related to the economic empowerment of women.