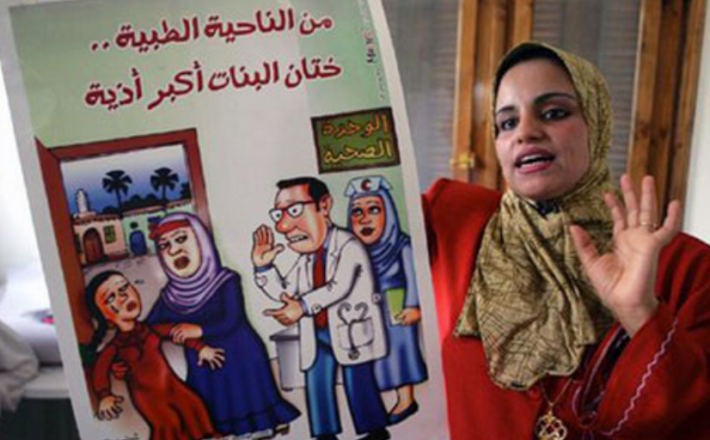 Local rights groups criticized on Tuesday the legal provision on female genital mutilation (FGM) in its current format, proposing several amendments besides those put forth by the health ministry.

Since its issuance in 2008, the legal provision against FGM has failed to deter the ongoing practice, which has afflicted more than half of Egyptian girls aged between 15 and 17, according to UN statistics.

The law sets a punishment of between three months and two years in prison or a fine of EGP 1,000 – 5,000 on anyone who causes an injury due to FGM.

The organizations, including the Egyptian Initiative for Personal Rights (EIPR) and the Egyptian Center for Economic and Social Rights, praised the omission of the reference to Article 61 of the Penal Code in Article 242. The omitted reference exempted the perpetrator of the crime from penalty given he/she was forced by necessity to do it.

The organizations further welcomed the inclusion of a definition for FGM in the legal provision that penalizes it.

According to the World Health Organization, FGM comprises “all procedures involving partial or total removal of the female external genitalia or other injury to the female genital organs for non-medical reasons.”

However, the organizations criticized the fact that the adopted penalty for FGM is the same for all those involved in the crime, saying that it is not the “ideal solution” for the issue.

According to the health ministry’s proposal, the punishment will be raised to 2-3 years of imprisonment or a fine between EGP 10,000 and 50,000, to be applied to anyone who causes the injury, which is punishable by Articles 241 and 242 of the penal code due to FGM.

In case of serious injury or death, the penalty is raised up to a life sentence.

“Generalizing the penalty on all those involved in the crime will lead to more collusion between them, which results in deterring the reporting of the crime and impunity for the original perpetrators – mostly doctors,” the statement read.

The one-penalty-for-all doctrine also breaches the principle of proportionality in the law between crime and punishment, the organizations added.

However, the rights groups advised to preclude the parents from punishment in the case they report the incident or reveal vital information that leads to the original perpetrator.

The organizations also recommended holding clinic owners and hospital managers responsible for FGM operations that take place on their premises, given that they had prior knowledge of the practice and did not take action to stop it. This would expand the “circle of responsibility” for the crime amid the “medicalization of FGM” that Egypt is witnessing, according to the statement.

The statement concluded that the law is not the only means to counter FGM, as the societal perceptions of the importance of FGM must be changed through strengthening the discourse of women’s rights.

Last May, 17-year-old Mayar Mousa of Suez died due to bleeding followed by a sharp fall in blood circulation during an FGM operation.

Mousa’s death sparked anger against doctors and laws that tolerate the practice despite the ban imposed in 2008.

The prosecution accused Mousa’s mother, the doctor who performed the operation and the anaesthesiologist of involuntary manslaughter and causing a wound that led to death. The doctor is still at large.

The trial date for Mousa’s case is yet to be set.

The first doctor convicted in an FGM case, Raslan Fadl, recently served a three-month sentence for performing an FGM operation, more than a year after a January 2015 court ruling sentenced him to two years for involuntary manslaughter and three months for practicing FGM.

Fadl performed the operation in June 2013 on 13-year-old Sohair al-Bata’a, who died during the surgery.

He turned himself in on April 2 and served his sentence until July 2. Lawyer Reda Danbouki of the Women’s Center for Guidance and Legal Awareness, who pursued the lawsuit against Fadl on behalf of the deceased girl in 2015, said that the two-year sentence was annulled as Fadl reconciled with the family of the girl.

The practice of female genital mutilation conducted on girls between 15 and 17 has dropped from 74 percent in 2008 to 61 percent in 2014, according to the United Nations Development Programme (UNDP).

UNDP said in a statement late May, “In Egypt 82 percent of female circumcisions are performed by trained medical personnel.”

The UN has called on health professionals “to take a strong stand to stop the medicalisation of FGM.”. Click here to access the source.