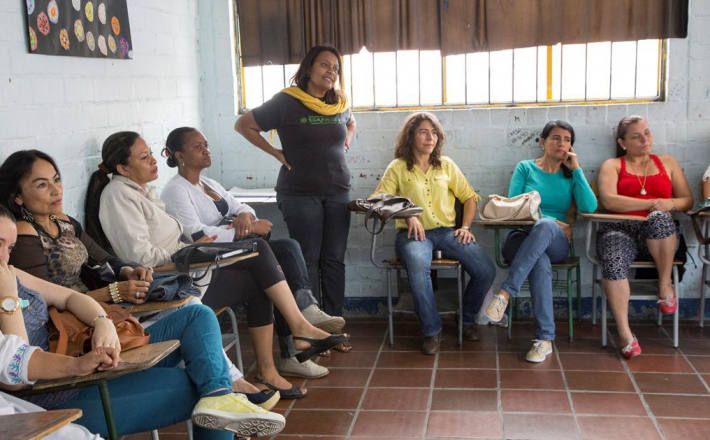 OpenDemocracy has published the following report in defense of grassroots women crisis responders.

“False claims that deny the impact of grassroots women's crisis responses are diverting much needed resources away from the very people making the best use of them.

If your house was on fire, you wouldn’t sit back and ponder whether hosing it down is the right option. You would do what works and douse those flames with water. Yet these days, governments are watching the gathering flames of entrenched humanitarian disasters and equivocating over whether water is really the best way to go.

There is a dangerous and misguided notion taking hold among states that are charged with funding and coordinating international humanitarian responses. More and more, they float the claim that there is insufficient proof of the effectiveness of grassroots women’s interventions in crisis settings. This claim is not just demonstrably false, it also threatens to divert much-needed resources away from the very people making the best use of them.

In a crisis, women waste no time in putting our most effective solutions into action. When drought and famine gripped northern Kenya, local women organized as indispensable first responders, providing food and water to struggling families far from official refugee camps. Through Colombia’s grinding, 50-year war, women transformed embattled communities into peace enclaves that bolstered local ceasefires and negotiated the release of hostages. When Nepal's earthquake struck, local women set up temporary shelters and distributed health kits  And two years ago, when ISIS invaded the northern Iraqi city of Mosul, women mobilized immediately to set up emergency escape routes for human rights defenders and urgent humanitarian aid deliveries, even as large international aid agencies were pulling out of the danger zones.

I was recently in Erbil, Iraq, to meet with some of these women. I was struck by the gulf between their reality and the myths being perpetuated by some policymakers. With the north of their country still ruled by ISIS and the rest by a government that denies women basic rights, these activists planned strategies to keep their women’s shelters open and strong. They debated the best counseling methodologies for girls who were enslaved by ISIS and those who were abused in forced marriages condoned by the state. They honed communication tactics between nodes in the activist network they’ve built across Iraq, spreading a safety net to communities where no other aid reaches. They hammered out new security protocols because they know they are risking their lives every day to do this work.

Policymakers call these women service providers, but they are so much more. Woven into the strategizing in Erbil were debates over how to push for an end to violence against women—not just the violence of ISIS, but all of it. As an initial step, the women are campaigning locally and internationally to overturn the Iraqi government’s ban on the shelters they are currently forced to run illegally. And they’re winning; they’ve already generated unprecedented global pressure on the Iraqi government to change this law.

These women’s expertise in policy advocacy is not merely an add-on to their role as care providers. Rather, their work as grassroots organizers informs and motivates their policy prescriptions, turning them into the most valuable policy advisor an official could hope for.

Yet, this opportunity is squandered by policymakers who dismiss the value of women’s local organizing. Without bothering to measure the impact that these groups create, they claim that there’s no evidence that grassroots women create impact.

When policymakers and researchers have bothered to document the impacts of local women’s mobilization, the data confirms what people in Kenya, Colombia, Nepal, Iraq and other humanitarian crises could already attest to: grassroots women’s work in war and disaster is life-saving and its impact is felt globally.

A few examples can serve to illustrate. In multiple case studies of humanitarian aid delivery after disaster, experience shows that food aid is most likely to be shared equitably and to reach the most vulnerable when it is distributed by local women: from Tanzania, to Haiti, to Swaziland and beyond.

Another set of data is a 40-year, 70-country study on efforts to combat the global crisis of violence against women, which showed that local feminist mobilization was the most successful strategy, outpacing all efforts by governments or large NGOs at legal reform and education to end violence against women.

Furthermore, in a world where half of peace agreements fail within five years, women’s participation has been shown to be a game-changer. A study of 40 peace and transition processes revealed that grassroots women’s effective participation creates peace agreements that are 35% more likely to last for at least 15 years.

These examples serve as a call to action for more data of impact, which can lead to more funding and support for grassroots women’s efforts. Meanwhile, policymakers who doubt the value of local women’s crisis response should account for the performance of larger operations in war zones and other disaster settings.

After all, international aid agencies still struggle to access the same ISIS-controlled territories that Iraqi women have managed to penetrate. While they were pulling out, grassroots women were rushing in to help.

Or consider that large aid agencies have time and again failed to meet local needs, instead wasting resources in a dynamic revealed in epic fashion by the Red Cross in Haiti.

When big organizations swoop in, they can also siphon funding away from local responders who know better what they need. Concentrating resources in the hands of foreign aid workers, who are soon to leave, robs people of the opportunity to lead their own recovery efforts, develop new skills and build the resilience they need to face the next crisis.

To be sure, bigger operations do have a critical role to play, particularly when government is unable or unwilling to meet its responsibilities. Yet, there’s a mixed record when it comes to large-scale international responses to crisis.

The best way to address the shortcomings of that model is to give grassroots women the recognition, resources and roles in policymaking they deserve. Elevating, not undermining, local women’s organizing is what governments should do to put out the fires that threaten to consume our planet.” Click here to access OpenDemocracy website.