Calming tensions and spurring women to vote in Haiti

Calming tensions and spurring women to vote in Haiti 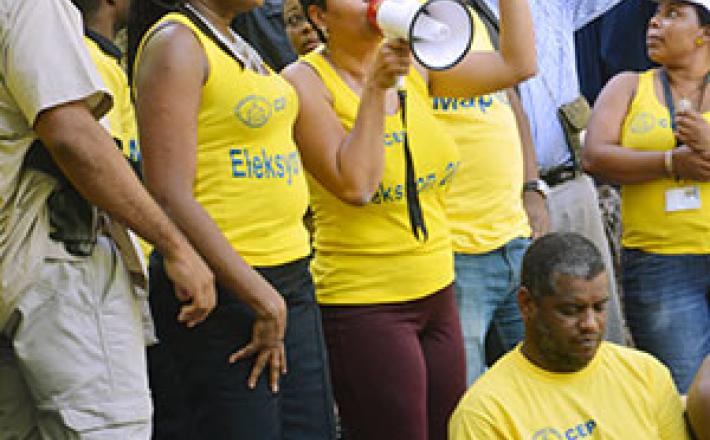 Back in 2006, in the lead-up to Haiti’s long-awaited general elections, Nadege Beauvil was a volunteer with Haiti’s national women’s umbrella organization, Femmes en Démocratie. It was a Saturday morning, the day before voting day, when she received a call that 200 angry women election observers were demanding to meet with her.

“I didn’t have a cent in my pocket at the time, so I had to borrow money from the neighbour to take a cab,” she recalls. The room was tense and a cacophony of voices arose from the women volunteers who had traveled from different regions to receive kits to observe the elections. They were upset because the ‘gratification money’—a subsistence allowance to cover their minimum food and travel expenses—was less than expected. They wanted to walk away.

“I took the time to listen to each and every one of them,” says Ms. Beauvil. “I had to appeal to their hearts and to their solidarity. I had to be compassionate about their time, hear them out and calm them down. I told the women that I knew exactly where they were coming from. I even showed them my empty pockets and told them I had to borrow money from my neighbour just to get there.”

That garnered a few laughs and broke the ice. In the end, they undertook their volunteers’ role with full energy and monitored the elections as planned the next day.

As of 2015, Haiti was tied for last place (185th) on the Inter-Parliamentary Union’s world ranking of women in politics, without a single female member in either its lower or upper houses of Parliament. Haitian women also turn out to vote in far fewer numbers.

In her current position as a Programme Specialist on issues including women’s leadership and political participation for UN Women, Ms. Beauvil was trying to bring a change to this scenario, and steering a project to encourage more women to vote in Haiti’s long-delayed parliamentary elections. It was a Sunday morning, 2 August 2015, just a week before voting day, and she had already been hard at work since the crack of dawn. With her husband helping, and her five children with a babysitter, she was busy filling boxes and organizing voter outreach material to bring to training sessions when she received an angry call from one of the local grass-roots organizations that had been asked to support an awareness-raising campaign. The project had begun just four weeks before the elections, leaving little time to galvanize funding and other resources..

“Once the elections were confirmed, we really had to fight to secure the funds because the official Elections Plan had not specified any funding for women’s political participation,” explains Ms. Beauvil. The project was finally approved but some of the funding would arrive after the election. But women’s groups, weakened by the 2010 earthquake, were under-resourced, and had no funds to rely on.

“Our office is in Port-of-Prince and our project was in all 10 districts across the country, so there was no way we could do this work without the help of women’s organizations,” she says.

Much of Ms. Beauvil’s work involves close collaboration with civil society and women’s groups on projects, and it’s important to keep them committed and engaged.

“Having to convince penniless women to go above and beyond is no small feat,” she reflects, saying it helped that both organizations had a mutual respect to build on, having worked together on other projects.

“I told her how much we depend on them and even if sometimes we work through a weekend, we all do it, because we’re that committed to the cause—our cause—empowering women!”

The partner eventually calmed down and reaffirmed her organization’s support.

But Ms. Beauvil’s work for the day was far from over. “We had so much to do in so little time—it was practically mission impossible. But I kept the faith. I told my team: we will make it!” she says.

She spent her entire weekend packing and trucking boxes of materials such as t-shirts with slogans on the importance of women’s vote, to all districts. “But it was worth it all in the end. We did everything we intended to do in time, the funds were disbursed to the women's organizations, and some women who said it was ‘mission impossible’ applauded our success.”

Haiti’s Parliament was officially installed early 2016 and today UN Women is collaborating with parliamentarians on an agenda to integrate women’s voices and concerns in partnership with the Commission on Women’s Affairs of the Lower House of Parliament. UN Women is also working with Women’s Ministries and organizations to raise public awareness of the National Strategic and Action Plan for Equality between Men and Women, launched on 6 March 2015 after more than three years of lobbying and contributions by UN Women, supported primarily by the Government of Canada.